Memorial Services for Helen B. (Dahl) Anderson  of Albert Lea will be at 3 p.m. Saturday at Bonnerup Funeral Service in Albert Lea. The Rev. John Holt will officiate. Interment will be in Graceland Cemetery at a later date. 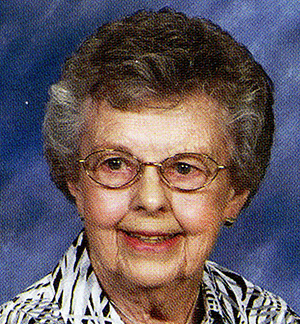 She married Glen E. Anderson on June 26, 1939, at the parsonage of the First Lutheran Church in Albert Lea. Helen had worked at Wallace’s department store in Austin and Albert Lea. Together, Helen and Glen owned and operated Elbow Room in Albert Lea for several years.

She was a member of First Lutheran Church in Albert Lea. Helen enjoyed playing a good game of 500 or Mexican train and bowling. She loved to entertain and was an awesome cook, baker and hostess. Helen and Glen also enjoyed traveling before he died in 2001.

She was preceded in death by her husband, Glen, in 2001; sister, Lucille Lerum; and brother, Carroll Dahl.

Helen will be greatly missed by her family and friends.