Memorial services for Jean Helen Lunde, 89, of Albert Lea, will be at 2 p.m. Saturday at Bayview/Freeborn Funeral Home. The Rev. Don Malinsky will officiate. Visitation will be one hour prior to the service at the funeral home. Online condolences are welcome at www.bayviewfuneral.com. 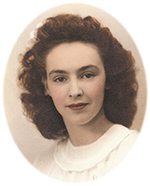 Jean Helen Dudley was born on Oct. 28, 1927, in Albert Lea. She went to Abbott and Albert Lea High Schools, where she graduated at the age of 17 in 1945. On Sept. 27, 1945, she married the love of her life, Robert Viker Lunde, who was from Moscow Township in rural Freeborn County. They were married almost 52 years, until Robert’s death in 1997.

Robert worked at Hormel and Jean worked as a division manager at Sears. They lived in Austin, until 1991, at which time they moved to Santa Maria, California. They travelled extensively during the time they lived in both Minnesota and California.

Jean was preceded in death by her husband, Robert; and daughter Lanna Lunde.