Funeral services will be at 1 p.m. Friday at Bethel Lutheran Church, 810 Third Ave. SE in Rochester. The Rev. Norman Wahl will officiate. Burial will be at a later date.

John Stadheim was born Sept. 22, 1937, to Louis and Evelyn (Hellie) Stadheim. He grew up in Bancroft Township on a farm with six brothers and two sisters. Some of his fondest youth memories include winning the Mower County Spring Barr Bourgh Show with his champion pig and a blue ribbon win at the Freeborn County Fair for his cow clipping. He and his brother, David, had two Percheron horses named Sonny and Sip, which he took pride in and enjoyed. John loved to dance, especially the Albert Lea shuffle, and looked forward to school dances and the Terp Ballroom. In 1955 he graduated from Albert Lea High School. 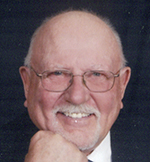 John married Janis Pierson on Aug. 17, 1957, at First Lutheran Church in Albert Lea. He was employed by IBM for 35 years as a machinist and later as a procurement engineer. John was a member of Bethel Lutheran Church in Rochester, where he enjoyed being an usher. The couple lived in Rochester for 44 years and then moved to Lake City Jewel Golf Course in 2003.

John was a contributor to the community as a landlord with a variety of properties through the years. In his free time John enjoyed his family, traveling with his wife, golfing, bowling, snowmobiling, hunting and his black labrador retrievers. He was especially gifted in the garden and his talent produced flowers that were visually appealing and produce that was flavorful at the table.

He was preceded in death by his parents; three brothers; one sister; and one grandson, Joseph John.

Friends and family may visit from 4 to 7 p.m. Thursday at Schleicher Funeral Homes’ Lake City chapel in Lake City, and one hour prior to the service at the church on Friday.

The guest register can be signed online at www.schleicherfuneralhomes.com.