Jeromy Eugene Dann, 34, faces charges of second-degree assault with a dangerous weapon, felony fleeing a peace officer in a motor vehicle, second-degree burglary and possessing ammunition or firearm with a previous felony conviction, according to the Freeborn County Attorney’s Office. 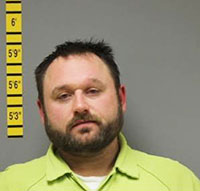 Dann was arrested after deputies were dispatched to Julio’s Bar and Grill at about 3:30 a.m. Sunday on a report of a burglary in progress, according to the Sheriff’s Office. As deputies were en route, Dann allegedly left the scene, and they were informed that he had taken the cash register.

A deputy reportedly found the vehicle traveling south on Freeborn County Road 26 south of Hayward, and a vehicle pursuit ensued. Dann attempted to ram the pursuing deputy’s squad car, but was unsuccessful, according to the Sheriff’s Office.

The vehicle left the roadway near Freeborn County Road 1 and 820th Avenue and entered the ditch, according to the Sheriff’s Office. Dann was then taken into custody.

No injuries were reported in the pursuit.

The cash register, along with other items, were recovered from Dann’s vehicle.

The incident is being investigated by the Freeborn County Sheriff’s Office. The Albert Lea Police Department assisted with the pursuit.

Dann is expected to appear in court on the charges today.