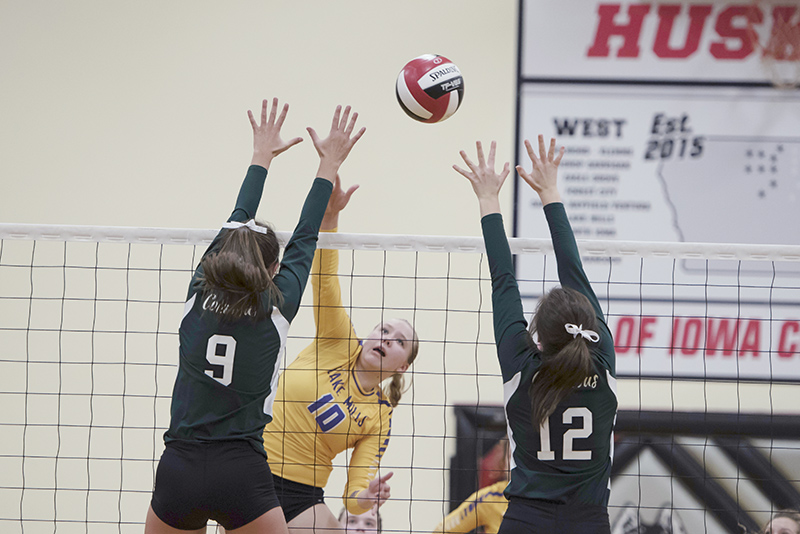 Lexi Groe goes up for a kill during Lake Mills' section final game against Columbus in Nov. 2016. The Bulldogs came within one set of going to state. -Lory Groe/For The Albert Lea Tribune

Lexi Groe has had quite the sports career in high school.

The Lake Mils senior has accomplished a lot and has been of some great teams, developed strong friendships and accomplished goals.

“I have had a great time at Lake Mills,” Groe said. “I can look back and say, ‘I have had some great memories here.’”

Groe is a three-sport athlete for the Bulldogs, and her varsity career started in her freshman year when she became part of the track and field and girls’ basketball teams.

She made it to state in track and field her freshman year. In basketball, she helped her team win four games, but has since built on that total each year. She became a starter in volleyball, a sport Lake Mills is known for being a powerhouse in.

These experiences have shaped her and given her memories.

“The friendships I have made throughout the sports I have played have been tremendous,” Groe said.

However, one sport — volleyball — stands out to her the most.

“This past season was an unreal experience,” Groe said. “The team chemistry was amazing. It was the best team I’ve ever been on. It was more of a family than a team. I owe a lot to Coach Boehmer. I think of him as more than a coach.”

Lake Mills came within one set of advancing to the state tournament and finished with a record of 41-1.

“We watched film of (Columbus) and practiced different techniques to beat them,” Groe said. “I guess when you practice and put a lot of effort into something, it hurts more than when you didn’t put as much effort into that same thing.”

Groe was a vital part to the team’s success. She finished the season with 290 kills and 63 blocks.

In basketball, she has helped her team to a record of 10-5 and eclipsed the 800-rebound mark in a game at North Butler on Saturday.

She will head to Wartburg College and will play volleyball for the Knights this fall.

“I’m excited for the opportunity to compete in college,” Groe said. “It is kind of like starting a new chapter in life.”

Groe doesn’t know what she would like to study just yet, but said a variety of majors have her intrigued.

In her free time, she likes to hang out with friends, go to movies and play with her pet goats.

How she got her pet goats is a story in of its own.

“I got the two goats for making it to the state track meet my freshman year,” Groe said with a smile on her face. “My dad wasn’t really sure if I was going to make it to state, so I made him put a goat on the line. I made it in two events, so I got two goats.”

As her time winds down at Lake Mills, Groe is hoping people remember her as a positive person, as someone who impacted others in a positive way.

“I have had a lot of positive support throughout my time at Lake Mills,” Groe said. “I hope people can remember me in a positive way, as someone who made their day a little better.”