A memorial service for Lorraine Berg will be at 1:30 p.m. Monday at the Bonnerup Funeral chapel in Albert Lea. The Rev. Shane Koepke will officiate. Visitation will take place one hour prior to the service. A private family burial will take place at a later date. 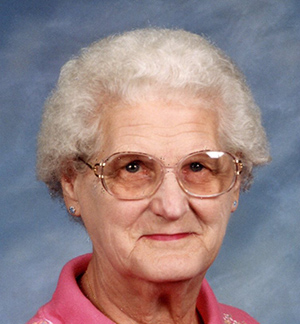 Lorraine (Perry) Berg was born Dec. 9, 1919, to Jean (Brown) and Elmer “Ole” Perry in Gordonsville. Within a few months, her family moved to Northwood, where she attended school. She worked for various farmers around Northwood at a young age.

She married Hoyt Gale in 1942, and they later divorced. She married Arthur Berg on Oct. 7, 1945. She worked five years at Land O’ Lakes, 12 years at Streater and 21 years at St. John’s Lutheran Community. She was a fan of the Minnesota Twins and Vikings.

She was preceded in death by both parents; husband, Arthur; a son, Kenneth; and siblings  Dale, Donald, Earl, Jerry and Ilene.