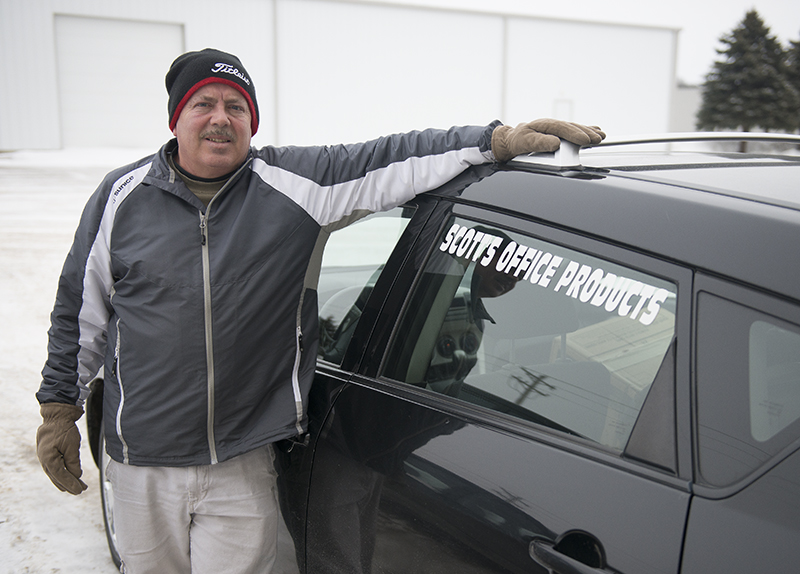 One Albert Lea man said that local support has kept him in business for over a decade.

Fifteen years ago, Scott Rasmussen started Scott’s Office Products — a business that offers office supplies and furniture, janitorial products and restaurant supplies, which are all delivered directly to the customer. Rasmussen said the idea for the business came from brainstorming.

“I felt there was a need for that in the Albert Lea area,” he said.

The majority of Rasmussen’s clients are in Albert Lea, but he also has clients in Clarks Grove, Glenville, Geneva and Austin.

Prior to starting Scott’s Office Products, Rasmussen was a meat broker and worked in product control at Hormel, respectively. He originally started his business in downtown Albert Lea, before subleasing a warehouse on Y.H. Hanson Avenue about 10 years ago.

When he first started his business 15 years ago, Rasmussen said he worked about 70 hours a week, much of which consisted of cold calling area businesses. He said it took him about two years to feel like his business was established. While he said he still makes some cold calls from time to time, Rasmussen has about 100 regular clients that keep him busy.

While his week-to-week hours fluctuate, Rasmussen said Scott’s Office Products is a full-time job for him. He has an employee who keeps his books for him and also has a part-time furniture delivery person.

Rasmussen uses two suppliers that send truck deliveries to his warehouse three days a week. He said he keeps the basics stocked in his warehouse, and when a customer asks for something he might not typically carry he does his best to track it down for them.

Customers can order from Scott’s Office Products by calling 507-373-8316 or by going to scottsofficeproducts.com.

Rasmussen, an Albert Lea native, has an adult daughter, Dayna, who lives in the area. Rasmussen is an avid golfer, enjoys fishing and is in a winter cribbage league. He lives with his miniature schnauzer, Oscar, who he said is his “original salesman.”

“He’s older than my business is,” Rasmussen said, laughing.

For Rasmussen — and Oscar — the business is all about customer service.

“I enjoy that type of work,” he said. “I’m very thankful for the local support that I get.”