Marian Carol Borglum, 92, of Bricelyn died Wednesday, Dec. 28, 2016, at Mayo Clinic Health System in Mankato. A funeral service will be at 11 a.m. Friday at North Blue Earth Lutheran Church in Brush Creek Township. The Rev. Nancy Dreier will officiate. Visitation will be one hour prior to the service at the church. Interment will be in the church cemetery. The family prefers memorials to United Hospital District Hospice. Bruss-Heitner Funeral Home in Bricelyn is assisting the family. To leave an online condolence, visit www.brussheitner.com. 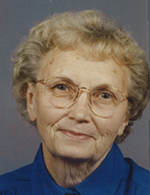 Marian was born Aug. 31, 1924, in Foster Township, Faribault County, the daughter of Carl and Alma (Hermanson) Steinhauer. Growing up Marian spent many days tagging around with her dad, riding bikes and playing with the kittens and puppies. She was baptized and confirmed in Faith Lutheran Church in Walters. Marian attended Country School District No. 77 and graduated from Kiester High School in 1941. She attended Mankato State Teaching College and graduated with an elementary degree in 1943. Marian was a teacher in District No. 62 near Easton for two years. She also taught in Walters for a year and a half working at the grocery store. She also held jobs in home health care and at the Bricelyn canning factory.

Marian was united in marriage to Harry James Borglum on May 9, 1947, at Faith Lutheran Church. Together they spent many years farming in the Brush Creek area. Marian loved to bake cookies, pies and banana bread for friends and family. She also enjoyed sewing, making quilts and baby quilts for all the new members of the family and those in need. She joined North Blue Earth Lutheran Church in 1949 and was active in ladies aid, Sunday school and Bible school.

She is preceded in death by her husband, Harry; siblings Willard (Marvel) Steinhauer and Angela Steinhauer; and nephew, Steven Steinhauer.