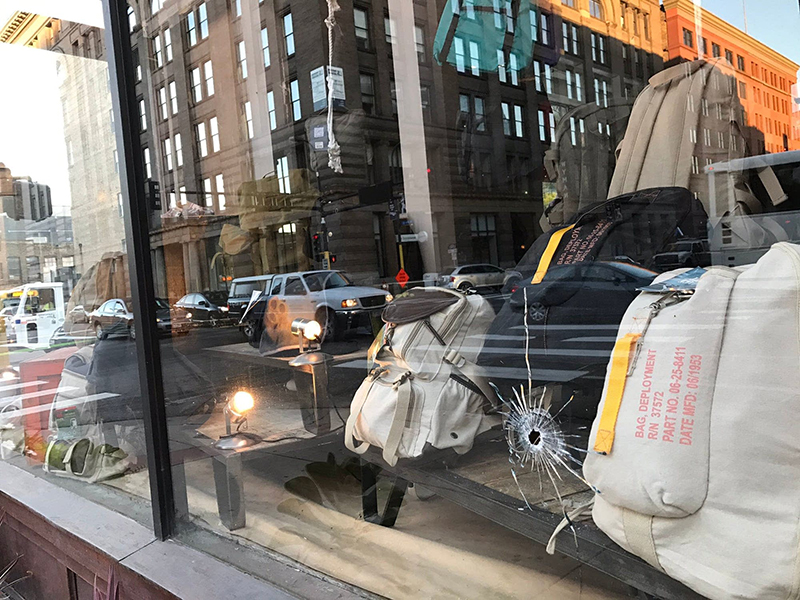 A spike in shootings in Minneapolis has not led to more deaths, but the numbers currently available still paint a picture frustrating to police. Pictured is a bullet hole that punctured a downtown storefront. - Jon Collins/MPR News file

Gang battles fought largely on the city’s north side that sometimes spilled into downtown led to a spike in Minneapolis gun violence during 2016.

Some 340 people were hit by gunfire in the city through Dec. 26, compared to 260 during the same time period in 2015, an increase of more than 30 percent and a more than 50 percent increase over the number of wounded at this time in 2014. Officials will release a more detailed report about crime in 2016 in the coming weeks.

The spike in shootings has not led to more deaths. But the numbers currently available still paint a picture frustrating to police.

A group of allied gangs operating in neighborhoods north of West Broadway Avenue identifying themselves as “highs” are fighting with allied gangs based south of the major thoroughfare who call themselves “lows,” and their ongoing turf wars are fueling much of the mayhem, said inspector Mike Kjos, who heads the 4th Precinct in north Minneapolis.

Even those allied members fight among themselves, he added.

While 63 percent of non-fatal shootings occurred on the city’s north side, they gangs also clash downtown. After a late-night shooting downtown last October, Chief Janee Harteau didn’t announce the names of the gangs associated with any of the suspects or victims.

“These groups of people weren’t in any businesses; they were just downtown on a street corner. This isn’t about downtown,” she said. “This is about groups of people who have guns and are ready to use them. It’s about a moment in time.”

Harteau said the incident all started when two groups of people started fighting and posted the live video online. Police believe someone watched the video later joined the fight, which erupted in gun fire right across the street from downtown police station.

Social media has also played a role in the feud. Gang members have been known to make music videos to taunt their rivals and post them on YouTube. They also post inflammatory images on Facebook and Snapchat.

The unofficial homicide total for 2016 is 37, including 33 due to gunfire. Fifty homicides were committed in Minneapolis in 2015, including 39 due to shootings.

Too many people are using guns to settle disputes, said Kjos. And they’re not just teenage gangbangers.

“We had a shooting in the 4th Precinct last week between two cousins arguing over a parking space,” said Kjos. “And they’re older gentlemen. This wasn’t teenagers.”

Police continued to increase enforcement in high crime areas. Kjos and other leaders stress the importance of getting guns off the street and out of the hands of people who aren’t supposed to have them.

Police often recover those firearms during traffic stops. However, police made far fewer traffic stops in 2016 than they had in previous years. According to the most recent data available, officers across the city made 35 percent fewer traffic and suspicious person stops than in 2015. Officers in the 4th Precinct made 48 percent fewer stops than they did in the previous year.

Kjos said officers have become reluctant to make the traffic stops or suspicious person stops, due to heightened tensions between police and the community.

Those tensions have long simmered in north Minneapolis, but they really boiled over in November of 2015 when two officers shot and killed Jamar Clark, a 24-year-old black man. Those officers were cleared of any wrongdoing.

Kjos said he doesn’t believe the drop in so-called pro-active stops has led to the increase in shootings or other crimes. He noted the precinct has seen a drop in robberies, down 18 percent, and burglaries in the precinct are down 46 percent from last year.

Under Harteau, the department has engaged in several initiatives designed to improve police community relations. And all officers have received implicit bias training and have been taught how to de-escalate volatile situations.

However, some police officials say the presence of body cameras, which were first implemented in a limited capacity six months ago, is already having an impact.