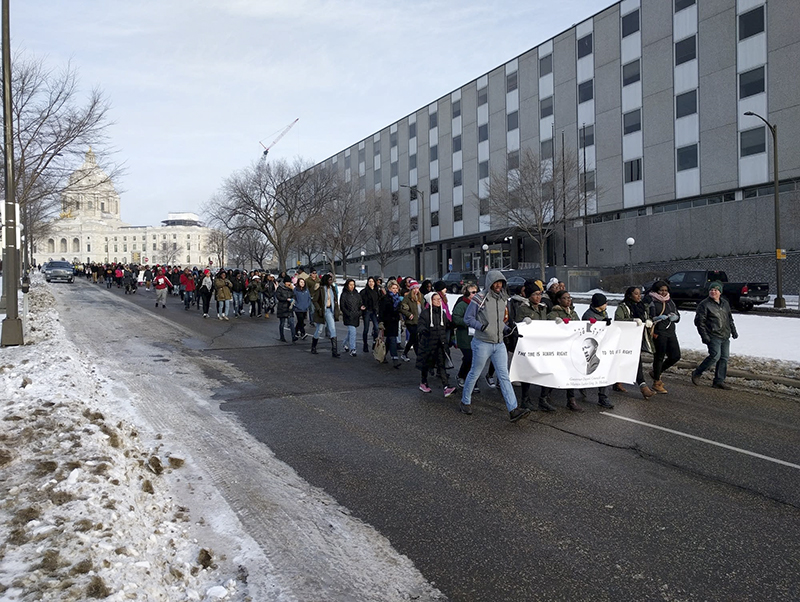 Minnesotans celebrated the legacy of Dr. Martin Luther King Jr. with marches and speeches that acknowledged a political climate that has exposed racial divisions reminiscent of King’s era.

In St. Paul, several hundred people marched from the Capitol to a MLK Day celebration at the Ordway Center.

Elijah Muhammad of Minneapolis was among the marchers. He said there’s a constant need for King’s message of nonviolence.

“What’s going on all over the world is violence, all over, and this movement is going to educate people to be nonviolent and help people to love and respect each other as human beings, just as Martin Luther King did,” he said.

In Minneapolis, thousands heard from Myrlie Evers-Williams at the annual MLK Holiday Breakfast at the Minneapolis Convention Center. The wife of murdered civil rights leader Medgar Evers has been a social-justice champion in her own right, as activist, author and former chair of the NAACP.

In her keynote address, Evers-Williams said the country is challenged as it has never been before.

“We are in trouble,” she said, referring to a kind of turmoil convulsing through the nation.

Four years ago, Evers-Williams delivered the invocation at President Obama’s second inauguration, becoming the first woman and layperson to have that honor. And yet, on a week that will see the swearing in of a new president, she left direct references to politics out of her 23-minute speech.

After the speech, however, the 83-year-old Evers-Williams met with reporters and was asked about president-elect Donald Trump.

The question, she said, “made me ill. Not what you said, just the overall state of this country.”

Asked about comments the president-elect made on Twitter that civil rights leader Rep. John Lewis, D-Ga., was “all talk” and “no action,” Evers-Williams said they revealed that Trump was “terribly ill-informed.” Lewis, who has criticized Trump, was beaten in his youth repeatedly for marching for civil rights.

On stage, Evers-Williams focused on the sweep of history that changed America — and reminded her audience that young people were often at the forefront of the civil rights movement. She remembered those painful moments in 1963 after her husband, Medgar Evers, was killed by a segregationist.

“I recall looking in the back of the car in which my children and I were riding, with the hearse in front of us that carried Medgar’s body,” she said. “All of the noise exploded. Hundreds of young people running and saying, ‘No more. No more.’”

She said today’s young people are crying out and looking to their elders for guidance and support — even as they’re challenging the old guard.

Evers-Williams said the older generation must listen to their cries, and help show them the way. She referenced viral video footage that of a teenager rioting in Baltimore after the death of Freddie Gray while in police custody.

“There was this woman who happened to be his mother, chasing him and telling him, ‘This is your community. You build it. You don’t burn it down.’ And it was just before Mother’s Day, and I thought to myself, ‘You go, Mom. You go,’” she said.

The theme of the breakfast, presented by the General Mills Foundation and the United Negro College Fund, was “The time is always right to do what is right,” a phrase borrowed from Martin Luther King Jr.

Evers-Williams said as her husband worked to overturn segregation, a fight that grew more dangerous, she pleaded with him: “I would ask him, ‘Why must you do this? Let’s just live a nice, ordinary life.’ And his answer was, ‘This is not a time to cull ourselves. It’s a time to get out there and march.’ I said, ‘If you continue that, do you know what will happen to you?”

Evers-Williams said her husband fell silent and finally answered, “You take care of my children.”

His wife said she always took that to mean not just their three kids, but the children of their country.