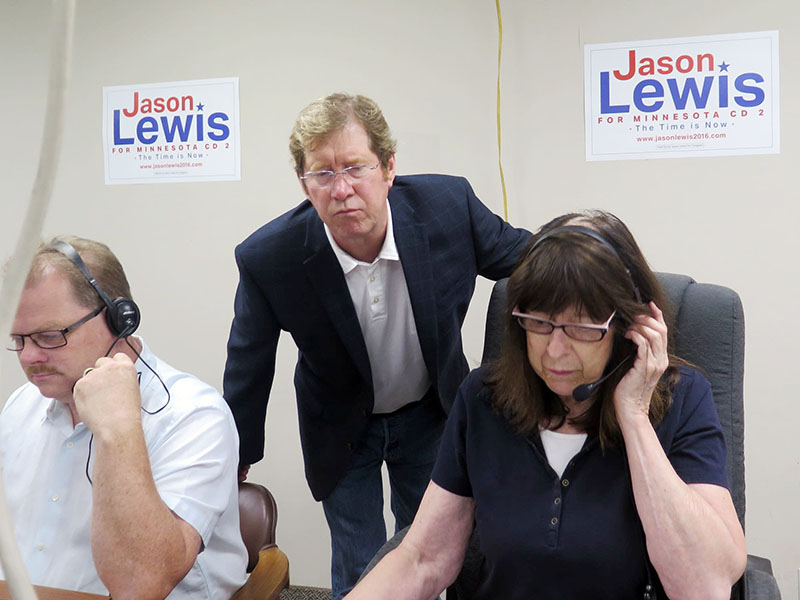 Jason Lewis, seen here with campaign volunteers, ran as an outsider like Donald Trump, and he shares the new president's desire to shake things up. Brian Bakst/MPR News file

The Republican-led Congress returns to work this week as Washington prepares for a presidential changeover like no other. Minnesota’s U.S. House members are already scoping out issues where they’ll agree with Donald Trump and where they’ll fight.

Five Democrats and three Republicans represent the state in the U.S. House to go along with two DFLers in the Senate. The only new face is Jason Lewis. He’ll replace fellow Republican John Kline, who retired from his 2nd Congressional District seat.

Like Trump, Lewis ran as an outsider, and he shares the new president’s desire to shake things up.

“We’ll see how much obstruction we get from the other side,” he said. “It’s not a filibuster-proof Senate majority, but there is some political capital in this first 100 days that needs to get used. Does that mean every problem is going to be solved tomorrow? Of course not, but you need action.”

It’s not yet clear whether Congress will steam ahead with its own agenda or let the Trump administration lead the way.

No matter who is in the driver’s seat, business as usual won’t cut it, said 6th District Republican Rep. Tom Emmer.

“I think the country is saying, ‘We want something new and different.’ And Republicans better act on it,” he said.

Emmer, one of Trump’s most ardent Minnesota backers during the campaign, believes the businessman is sending the right signals about working with supporters and opponents after taking office on Jan. 20. He agrees with the president-elect on issues expected to be front and center: A substantial transportation and infrastructure plan, an overhaul of Obama’s health care law and a reset of U.S. trade policy.

The dean of the state delegation, 7th District Democratic Rep. Collin Peterson, can see himself working with Trump on all three. But, he said, details matter.

“We have huge needs, especially in my district, with roads, with waterways on the Mississippi, with airports, you name it,” he said. “So, I am all in on a big infrastructure package. I’m also for paying for it so we’ll have to figure out how to do that.”

And on the promised repeal of the Affordable Care Act?

“You have got a bunch of people on health care now that weren’t on before. And you can’t just kick ‘em off,” Peterson said of the health law known as Obamacare. “You have to have some transition here. As long as they do it in a reasonable way and it’s not political, I certainly can work on that with them.”

Like Peterson, 4th District Democratic Rep. Betty McCollum said she won’t vote to kick people off health insurance. She wants to see details of Trump’s plans because she’s not sure that his words alone are enough to go on.

“I don’t know that you can believe much of anything he says that you can take that and possibly be able to work with him,” she said. “He’s been such a chameleon on all of his policy statements and he continues to be.”

Trump’s trade stance could confound the party dynamics the most. He campaigned hard against an Asian trade deal negotiated by the Obama administration, aligning him with DFL Rep. Rick Nolan in Minnesota’s 8th District and putting him crossways with Republican Rep. Erik Paulsen in the 3rd.

Minnesota has a lot on the line when it comes to trade, said 1st District Democratic Rep. Tim Walz.

“I think President Trump certainly hit a nerve with people, but I think he’s told people all trade is bad. In southern Minnesota, agriculture is dependent on trade,” Walz said. “It can be done fairly. It can be done in a way that benefits our country as well as others. It can be done keeping working protections and environmental protections in place. So I think they’ve got their work cut out for them.”

Paulsen said it would be a mistake to recede too much from global trade talks.

“I’m going to urge the new president in all free trade agreements and trade agreements to figure out what works for Americans and fix what doesn’t work, but keep us in the free trade game,” he said. “If we don’t compete, we lose customers, we lose business and our economy suffers.”

Paulsen didn’t back Trump in the campaign and said he didn’t vote for him. But the election, he added, is in the past. “Now, it’s time to focus on policy.”