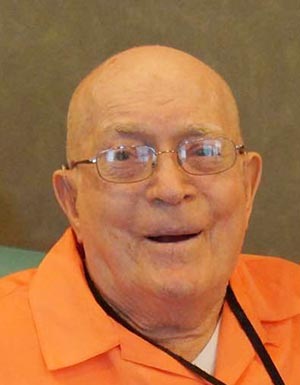 Omer was born May 13, 1926, in McIntosh, the son of Anton and Palma (Johnson) Wigern. Omer was baptized June 13, 1926, at Bethel Lutheran in Polk County, and confirmed Nov. 10, 1940 at Immanuel Lutheran in Kiester. Omer honorably served in the United States Army during World War II, stationed in Japan.

He was united in marriage to Marie L. Mischke on March 19, 1950, at St. Paul’s Lutheran Church of Evergreen. To this union three daughters were born: Linda, Elaine and Laurie. Omer worked at the Kiester Grain Elevator and the meat packing plant in Albert Lea. Omer was the caretaker for seven cemeteries in the area and for 23 yards in Kiester. He was a John Deere man to the end. Omer possessed a strong work ethic which he passed on to his children and grandchildren. He was an avid gardener, and he was famous for his lefse. He enjoyed fishing and watching sports on TV. His pride and joy were his grandchildren Tony, Rachel, Abby and Morgan and two great-grandchildren, Tyler and Briannah.

Omer was a grateful man and he maintained his gratitude even in the midst of his illness and struggle. He was very generous to his family and would give to others in need before himself.