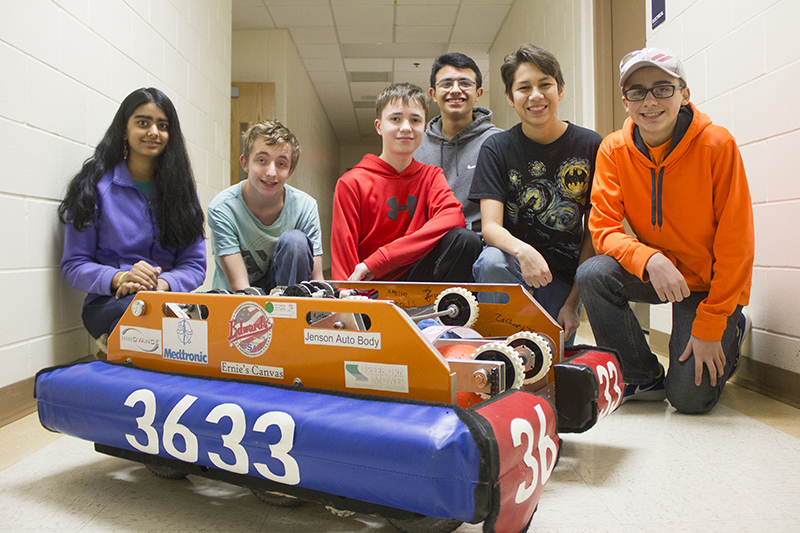 Albert Lea FIRST robotics students are learning to work together, build machinery skills and interact as they compete for a spot in a national competition.

Students are in a six-week process to design, build and program a robot for competition March 22 to 25 at the University of Iowa’s McLeod Center and at the Minnesota North Star Regional from April 5 to 8 at Mariucci Arena. A state robotics championship will be in May at Mariucci Arena, based on the results of the team’s performance at the initial regional competition. If successful in Minneapolis, students will compete at a national competition in St. Louis.

This year’s robotics team is working on building a robot, which will create power by shooting balls, relocating gears and climbing a rope, said robotics advisor Heather Sadauskis.

“The main focus of FIRST robotics is to bring about more awareness of science, technology, engineering and mathematics programs,” she said. “However, it is about more than just about robots. Students are also learning about publicity, fundraising, graphic design, team branding, web design, videograph and photography, public speaking, leadership, community involvement, cooperation and teamwork and gracious professionalism.” 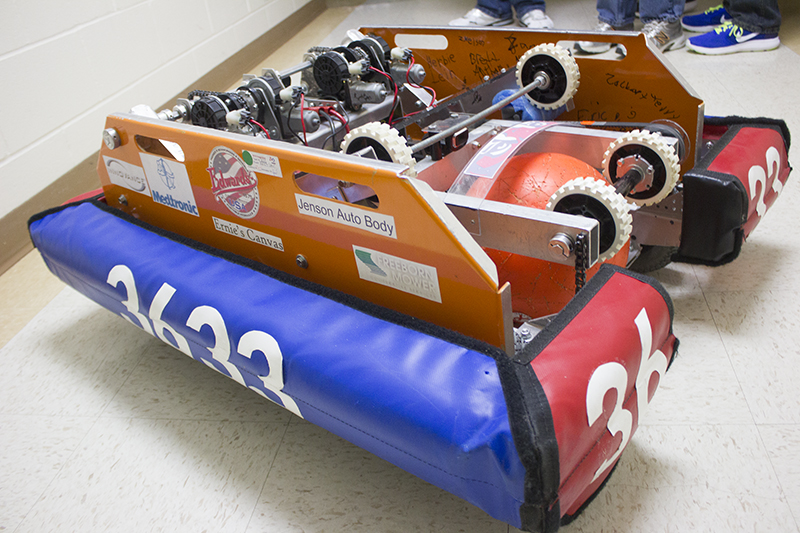 The Albert Lea robotics team builds robots to learn and to use in competition. A robot used in past competition is shown here. — Sam Wilmes/Albert Lea Tribune

Gracious professionalism encourages high-quality work and the value of others. Respecting individuals is a key concept of the program, Sadauskis said.

“One of the amazing things about FIRST robotics is that although the competition is fierce, everyone is treated with respect and kindness,” she said. “You will never hear booing or jeers at a robotics competition … competition and mutual benefit are not separate notions.”

Team members said the activity allows them to work together and enhance basic machinery skills, wiring, interaction, communications and coding.

Members said this year’s team is its largest since it was formed in 2011.

Students can letter in robotics by contributing 100 hours to it. The program is limited to high school students.

Students are thankful for the opportunity to grow.

“This is a very expensive sport, to do this stuff,” Mielke said. “So I am very thankful for the school actually letting us have a team here, since we are a smaller type of school. So, I enjoy doing robotics, and I think it is a long-term life goal. You can actually make a job at this.”

Mielke is confident about how the team will do.

“I think we will do pretty well this year,” he said.

According to the program, more than 88 percent of participants have more interest in succeeding in school and 92 percent are more interested in attending college.

About 35 percent of FIRST robotics scholarships can be used for any course of study, according to the program, and amounts vary from one-time awards to full four-year tuition.

The robotics team finished qualifying matches ranked third out of 60 teams last year at the Minnesota North Star Regional competition and nearly made it to national competition, Sadauskis said.

The robotics team will host a build-a-robot event for students in grades three through seven from 1 to 3:30 p.m. March 4 at Albert Lea High School. Registration forms will be sent home with students at elementary schools this week. Registrations are due Feb. 14.