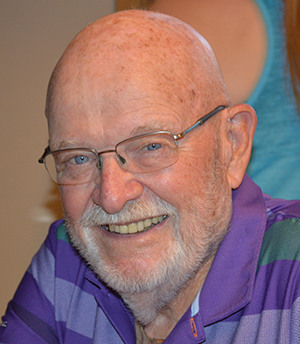 Tom was a graduate of Mankato High School, class of 1950. He went on to complete his political science degree at St. Thomas College in 1954.  On the advice of one of his uncles, Tom went to the University of Minnesota, where he obtained his law degree in 1957. From there he moved to Albert Lea to practice law until Aug. 1, 1977.  At that time he was appointed to County Court judge in Freeborn County, later becoming a District Court judge until his retirement on July 31, 1997.

Tom was an active member of his church and community.  He was a member of St. Theodore Catholic Church in Albert Lea for 60 years. Tom served as a lector and was grand knight of the Knights of Columbus. Tom was a member of the Jaycees, Elks Club, past president of the Lions Club, chair of the Albert Lea School Board and a scoutmaster for Boy Scouts of America.

Tom and Barb also participated in philanthropic organizations in Albert Lea including the Albert Lea Art Center, United Way and the Riverland Community College Scholarship Foundation.  Tom volunteered for the city of Albert Lea in sanitation and recycling. His favorite pastimes were golf, reading, gardening and first and foremost — his family. Tom enjoyed watching the Vikings, socializing with his amazing friends, his best friend, Barbara, and a Bushmills neat.

Funeral services for Tom will be at 11 a.m. May 5 at St. Theodore Catholic Church in Albert Lea.