Memorial services for Wallace Everett Wobschall, 96, of Albert Lea will be at 10 a.m. Saturday at Trinity Lutheran Church. The Rev. Eileen Woyen will officiate. Military honors will be accorded by the Veterans of Foreign Wars and American Legion honor guards. Friends may greet the family one hour prior to the service. Online condolences are welcome at www.bayviewfuneral.com. 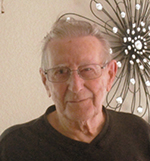 Wally was born Jan. 30, 1920, in Wilton Township, rural Waseca, to Erick Danial and Clara Dorothy (Reick) Wobschall. He lived there until 1930 when his family moved to rural Ellendale, where he farmed until 1954, when he moved to Austin; and in 2013 he moved to Albert Lea. He lived his whole life in Minnesota.

Wally served for three years and nine months during World War II in the Army Air Corps. He was stationed in North Africa, Italy and India. He returned to the family farm upon discharge.

On June 29, 1951, Wally married the love of his life, Margery Ann Ottesen, at LeSueur Lutheran Church in New Richland. They were married for over 65 years and were each other’s companions, rarely apart. They moved to Austin in 1954, where he worked for Murphy Freight until securing a position with Austin Public Schools. Wally worked most of his 27-plus years at Ellis Middle School as a custodial engineer, retiring in 1985. Upon retirement, he helped Marge with her drapery business until a few years ago.

He was a member of the American Legion, VFW, Moose Lodge and Eagles Club.

Wally loved to build things and work with wood, tinker around the house, and his yard was his pride and joy. He was willing to lend a helping hand to anyone who needed it and always put others first. He loved spending time with his children, grandchildren and great-grandchildren. Wally loved to dance and wore out a few pairs of shoes doing so. He was a kind and giving man and will be truly missed by all who have known him. May he rest in the arms of the Lord.

Wally was preceded in death by his parents; five brothers; five sisters; a son and daughter in infancy; and mother and father-in-law Clarence and Bernice Ottesen.