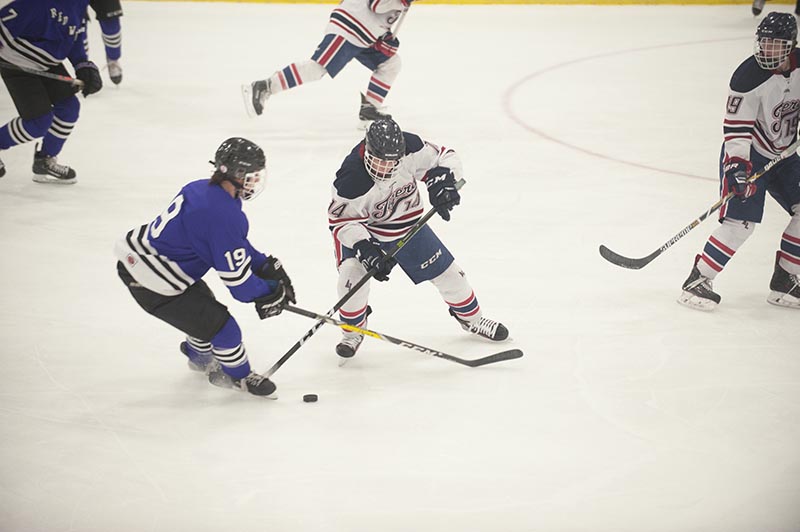 Albert Lea forward ALex Ulve battles Red Wing’s Jackson Maroushek for control of the puck during the first period of Tuesday’s game. The Wingers scored three goals in the third period to rally past the Tigers, 4-3. Jarrod Peterson/Albert Lea Tribune

After rallying back to take a 2-1 lead in the second period, the third period was one to forget for the Albert Lea boys’ hockey team Tuesday night against Red Wing.

The Tigers allowed three goals in the final period to lose a heartbreaker in the Big Nine Conference, 4-3.

The one positive Albert Lea can take away from the game was that it went 3-9 on the power play.

The Wingers took the lead in the first period when Seth Cushing scored the first of his three goals.

Albert Lea responded with goals from Austin Dulitz and Sam Chalmers in the second period, and goalie Ben Witham stopped all eight shots he faced in the period.

Cushing tied the game 4:10 into the third period when he scored on a short-handed goal.

Four minutes later, Albert Lea responded when Mitchell Evans beat goalie Zach Harding to give Albert Lea a one goal lead with just over eight minutes remaining. But Red Wing would respond with two goals in a matter of less than 90 seconds. First it was Barrett Blaney, then Cushing to put the Wingers up for good.

The loss stopped all the momentum Albert Lea had gained when it thrashed Austin on Saturday to stop a two-game losing streak. There still is plenty of time left to build momentum for the playoffs. Albert Lea has eight games left, but six of those games come against teams that are higher in the Big Nine Conference standings.

Albert Lea will start a two-game road trip on Thursday when it faces Mankato West.