Agreement may soon be reached in abuse case

A plea agreement may soon be reached in the case of a Waseca man who allegedly sexually abused a girl in September in Freeborn County.

Brandon Lee Boyum, 34, is charged with one count of both first- and second-degree criminal sexual conduct. 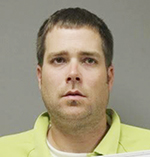 Boyum allegedly took pictures of and engaged in sexual penetration and contact with an 11-year-old girl Sept. 10, according to court documents.

A settlement conference was scheduled for Wednesday, but the case was not officially settled.