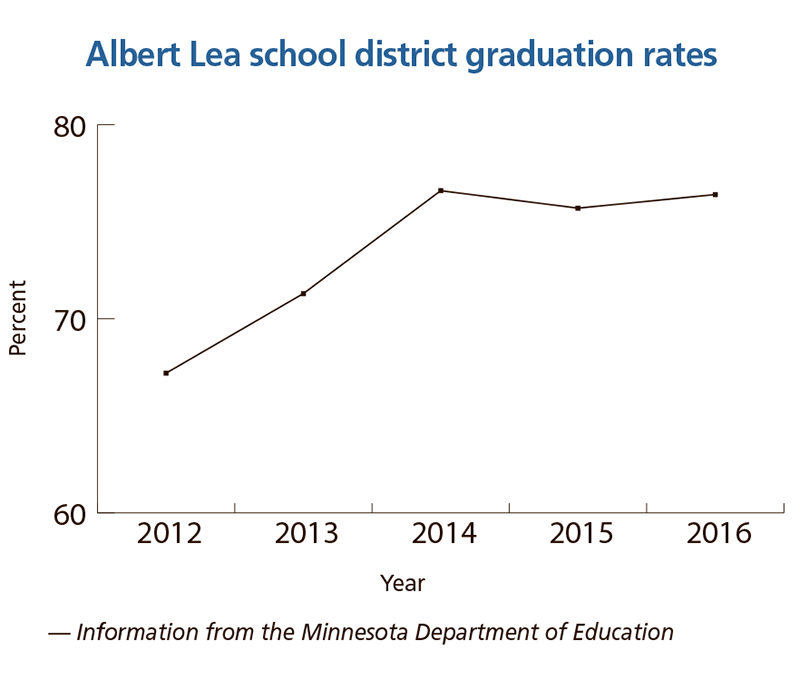 “We are pleased that our graduation rates for the district, high school and ALC are trending in the right direction,” said Superintendent Mike Funk.

Student graduation rates have mostly increased across the district since 2012 in Albert Lea:

“We expect our graduation rates to climb as our programming, such as the ninth-grade student academy, positively impacts student success in school,” he said.

The academy provides more personalized instruction and guidance throughout the school day in English, social studies and science.

To improve graduation rates, officials have conducted after-school tutoring and busing, along with a credit recovery course. They have worked with truancy officers through Freeborn County to reduce truancy and improve school attendance.

Local grad rate increases come as the state rate continues to increase. According to MDE, the class of 2016 posted the highest graduation rate on record at 82.2 percent. Rates for all students increased by 1/3 of one percent from 2015 and 5 percent from 2011.

“Graduating high school is a crucial step in attaining the dream we all have for success in life,” said Education Commissioner Brenda Cassellius. “It is encouraging to see more Minnesota students — especially more of our students of color and American Indian students — reaching this milestone. It’s a promising step for stronger futures.”

“In order to close gaps, we need to see all boats rising, but our students of color and American Indian students need to move faster,” Cassellius said. “We’re seeing that happen across the state, and we need to double down on efforts to help every student earn a diploma.”

Cassellius said the state is emphasizing increasing graduation rates for all students, including implementing a tool to provide a snapshot of students in grades six and nine who are at an increased risk of not completing high school in four years.

MDE has taken a number of steps to increase graduation rates by:

Launching a statewide campaign that sets a goal of reaching a 90 percent grad rate for all students by 2020, with every student group having a graduation rate of 85 percent.

Setting new accountability expectations for school district grad rates by including them separately in the state’s Multiple Measurement Ratings system.

Identifying Title I high schools with the lowest grad rates, and offering strategic support to increase the number of students who graduate.

Offering intervention to students with behavior problems through programs.

Providing meaningful support to struggling schools through the Regional Centers of Excellence.