An Albert Lea man who allegedly stole more than $1,000 in items last week from an attached garage is charged with two felonies in Freeborn County District Court. 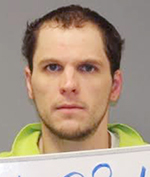 Court documents state Whelan was charged after an officer responded to a burglary call Friday in Freeborn County.

The alleged victim said several items had been taken from the attached garage during the night, including a black tri-fold wallet, a driver’s license, a $220 case, gift cards and credit cards, a circular saw, a brown duck bag and propane torch, an impact driver and accessories and a tool bag with assorted tools.

The credit cards were reportedly used at several businesses.

Court documents state a search of Whalen found a credit card bearing the name of the alleged victim.

Whelan reportedly admitted to entering the attached garage and stealing the items without permission. He stated he had been with two males but refused to provide any names, and he said he did not know the alleged victim.

He reportedly stated he burglarized the garage because he had lost his job and was broke.