Albert Lea police are looking for a 16-year-old girl who has been missing since Saturday.

Chloe Larson is described as being 5 feet 4 inches tall and weighing approximately 110 pounds. 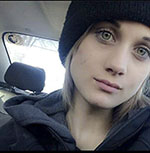 She was reportedly wearing a black beanie with a black Columbia jacket.

Police are concerned for Larson’s safety because of her known associates, Deputy Director of Police J.D. Carlson said.

Larson has been signed as a runaway. Carlson said he is not sure if she is still in Albert Lea.

Anyone with information is asked to call the Albert Lea Police Department at 507-377-5210.