Nyapuot David Reui, 19, was charged Feb. 13 with first-degree criminal damage to property, misdemeanor obstructing the legal process, disorderly conduct and underage drinking. Her first appearance on the charges was Thursday.

Court documents state Reui was charged after officers became aware of an underage drinking party on Feb. 12 in Albert Lea. 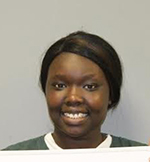 After arriving on scene, officers reportedly saw underage people leaving the residence and believed they had been drinking.

Court documents state Reui was handcuffed on scene after yelling at a lieutenant. After she was placed in squad car, Reui allegedly started screaming “Police brutality,” swore and started kicking the right passenger window and door in the squad car.

Damage was visible to the car, according to a witness.

Reui was allegedly verbally abusive toward officers and made accusatory statements about her race. After the squad car was returned to the Freeborn County Law Enforcement Center, trim by the passenger side window was damaged and a door was dented, court documents state.

Reui was allegedly intoxicated at the time of the incident. She was released on her own recognizance on Thursday.

First-degree criminal damage to property carries a maximum sentence of five years in prison and a $10,000 fine.