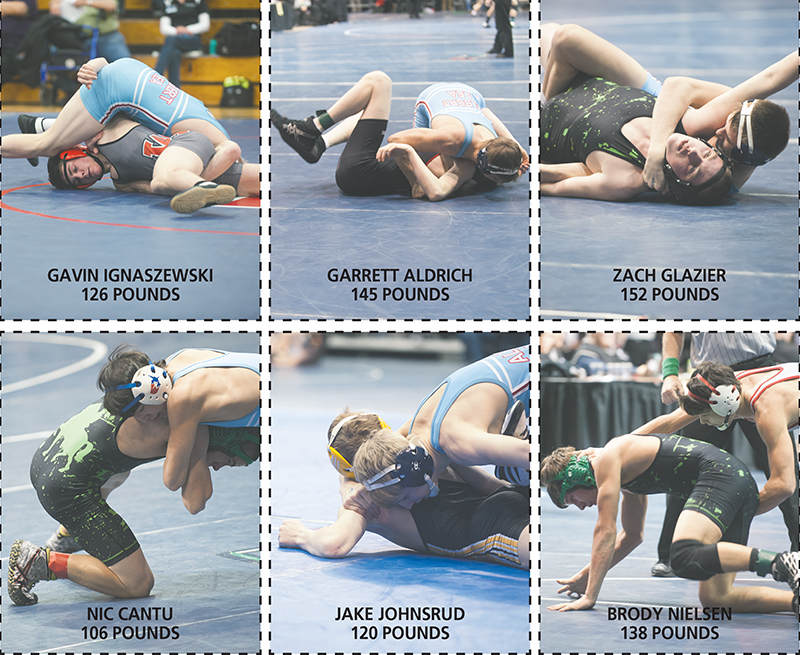 ROCHESTER — The weather threw a wrench into the schedule, but it didn’t slow down the Albert Lea Tigers wrestling team Saturday at the Rochester Civic Center.

Six wrestlers for Albert Lea placed second or first, meaning they will head to St. Paul for the state tournament that starts this Friday.

After receiving a bye in the first round, Ignaszewski faced La Crescent’s Andy Lopez. Ignaszewski had little trouble with him, pinning him in 32 seconds. Next up was Plainview-Elgin-Millville’s Joe Stucky. Stucky made things interesting in the match, but Ignaszewski pinned him, too, at 3:46. The win vaulted Ignaszewski into the championship match against Stewartville’s Brody Olson, where he won a 3-0 decision and punched his ticket to the state tournament. 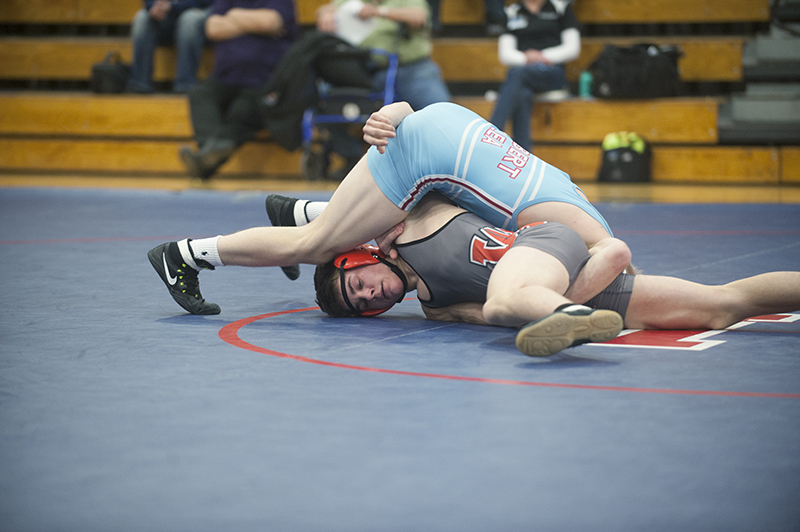 Albert Lea’s Gavin Ignaszewski wrestles in previous action. Ignaszewski took first place at 126 pounds and will be one of six wrestlers to represent Albert Lea at the state tournament. Jarrod Peterson/Albert Lea Tribune.

Garrett Aldrich, a three-time state champion will be heading back to the tournament after rolling through his bracket at 145 pounds. In the quarterfinals, Aldrich faced Chris Modrak of Cannon Falls and didn’t waste much time, pinning him at 1:12 of the match. The win spring-boarded Aldrich into the semifinals where he faced Plainview-Elgin-Millville’s Carter Marx. In a high-scoring affair, Aldrich held Marx down and won by a major decision, 19-10. That set up a championship match against Kasson-Mantorville’s Isaac Haman, who beat Aldrich 6-3 last week in duals. This time, Aldrich would get revenge. He beat Haman, 13-11. 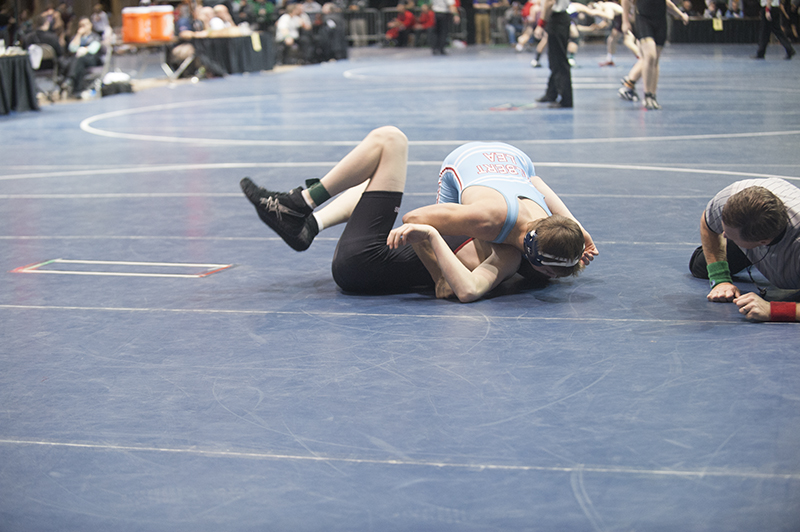 The final Tiger to finish in first was Zach Glazier at 152 pounds. Glazier won his quarterfinal match over La Crescent’s Dylan Schultz with a pin at the 1:39 mark. He would then face Byron’s Trent Nelson. Glazier kept Nelson at bay for the whole match and won by a 5-0 decision. In the championship round, Glazier took on McCoy Tekautz (Lewiston-Altura-Rushford-Peterson). Glazier was  able to stay in control throughout the match to win, 7-3.

Aside from the three wrestlers who finished first, Albert Lea had three other wrestlers — Nic Cantu, Jake Johnsrud and Brody Nielsen — finished in second place, which meant they’ll be heading to state.

“It feels awesome to have five other guys making the trip with me,” Glazier said. “I’m super excited for (Nic) and (Jake) to be going there for their first time. I look forward to (Albert Lea) crowning some state champs.”

“It’s very exciting to be going up there with my teammates,” Aldrich said. “It’s going to be a good time.”

At 106 pounds, Nic Cantu has been a tough matchup for many opponents this season, and he made it very difficult for opposing wrestlers on Saturday. Cantu defeated La Crescent’s Bryce Duffy by major decision, 12-0, in the quarterfinals. That set up a rematch from last week against Bennett Berge (Kasson-Mantorville) in the semifinals. Like Aldrich, Cantu got his revenge after losing to Berge last weekend. Cantu was in the driver’s seat the whole match, winning 5-0.  In the first-place match, Cantu took on Byron’s Matthew Petersen (38-0) and lost a 5-2 decision. That put Cantu in the second-place match agains Winona-Winona Cotter’s Ryan Henningson. Cantu had little trouble with Henningson, 7-1. 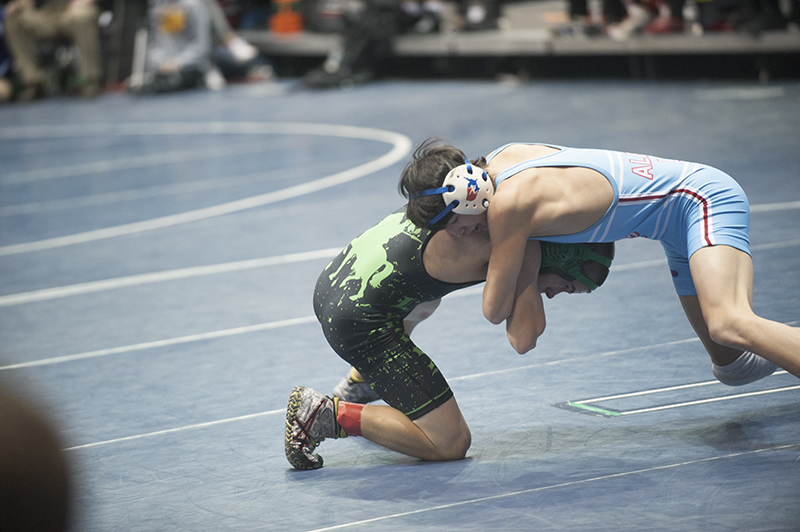 Johnsrud will be heading to the state tournament at 120 pounds after he won his second place match by rule over Josh Doerr (Lewiston-Altura-Rushford-Petersen). Johnsrud beat Garrett Olson (Plainview-Elgin-Millville) by major decision, 19-6, in the quarterfinals. That set him up with a match against Doerr in the semifinals. Johnsrud beat Doerr 8-5 before losing to Robby Horsman (Kasson-Mantorville), 13-6, in the first-place match. That set up Johnsrud with a rematch against Doerr for second place, where he won by rule over Doerr. 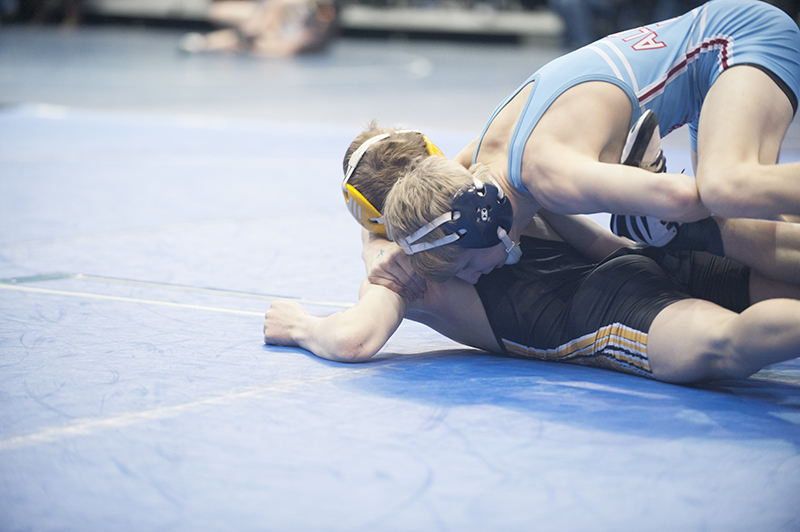 The final Albert Lea wrestler to make it to state was Brody Nielsen at 138 pounds. Nielsen finished in second place, where he also won by rule over Byron’s Ben Adamson. Nielsen took apart La Crescent’s Dylan Worrel, winning by technical fall, 16-1. Nielsen took on Adamson in the semifinals and won by a 3-1 decision. The win gave Nielsen a crack at Keaten Schorr (Kasson-Mantorville) in the first-place match. Schorr got the advantage early and never let up, beating Nielsen by major decision, 9-1. This set up another match with Adamson for second place where Nielsen won by rule. 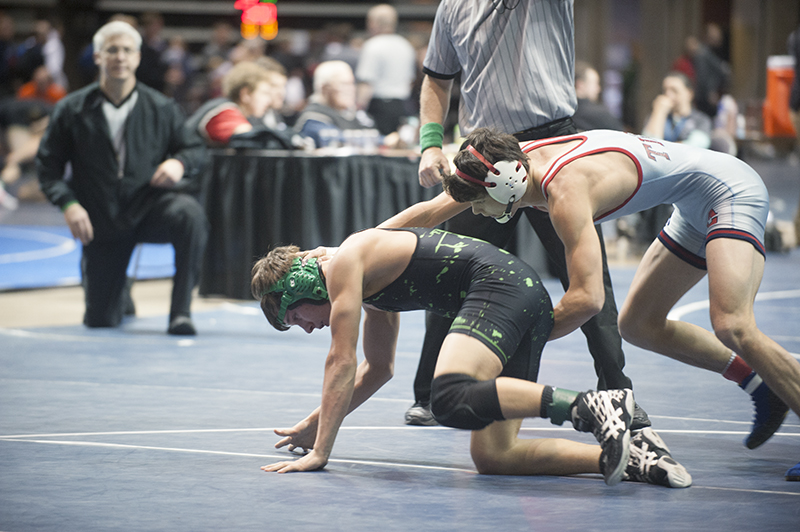 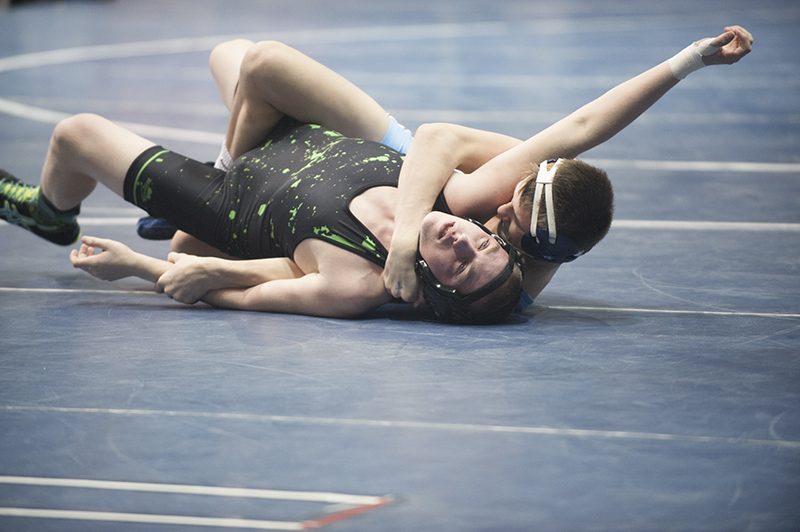 Albert Lea wrestler Zach Glazier gets opponent Dylan Schultz in a hold in their quarterfinal match on Saturday. Glazier won the match by pin at the 1:39 of the match. Jarrod Peterson/Albert Lea Tribune.

Other notable finishes for Albert Lea: