Alden woman is a candidate for Minnesota Teacher of the Year 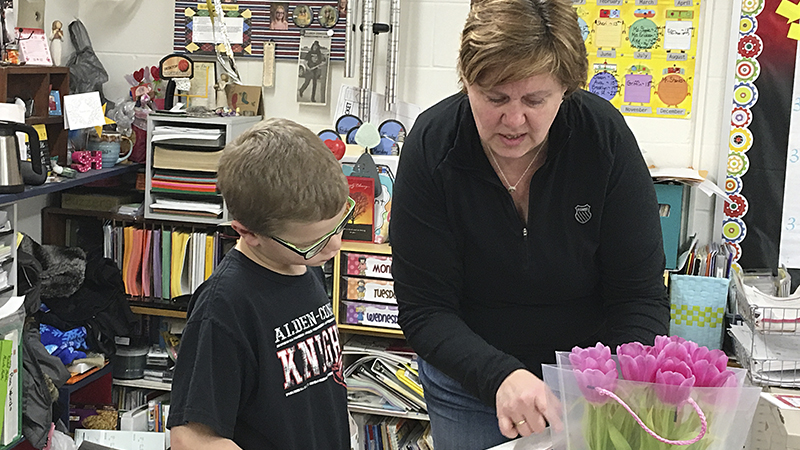 Alden-Conger Public Schools teacher Stephanie Hallman, right, talks with a student about an assessment Friday morning. Hallman has been teaching at Alden-Conger for 13 years and is a candidate for the Minnesota Teacher of the Year Award. Sarah Stultz/Albert Lea Tribune

ALDEN — For fourth-grade teacher Stephanie Hallman, being a teacher is much more than simply a career — it is a calling.

Hallman, who has been teaching with Alden-Conger Public Schools for 13 years, is one of 132 candidates vying for the 2017 Minnesota Teacher of the Year Award. The award will be announced May 7 in Bloomington.

She said she was nominated for the award by the Alden-Conger Education Association. The union members selected their nominations in October, and the deadline for state nominations was in November.

After that, she had to turn in a portfolio, including a resume and recommendation letters, as well as information about things such as her career experiences, community involvement, leadership positions and philosophy of learning, among other information. The list of candidates statewide was released in January.

“I took it as an honor, realizing all the other really good teachers who are here,” Hallman said about her school. “I felt like I owed it to them. It’s a feather in my cap, yes, but it’s really a feather for the Alden-Conger School District. It reminds people that we’re a little tiny school that’s doing great things.”

Hallman said when she started teaching at Alden-Conger she and another teacher oversaw both fourth and fifth grade at the school. Over the years, she transitioned into teaching only fourth grade, which she has been doing for the past nine or 10 years.

She said she gained an interest in teaching as the daughter of long-time Alden-Conger music teacher, Stu Potter, though her parents encouraged her not to be a teacher because of all of the work involved outside of the regular school day.

At one point she thought she was going to be a travel agent, but she said she ultimately got scared to go away from home. That’s when she turned to what she felt comfortable with, and that was teaching.

“In my mind, I feel like it’s a calling rather than a career choice,” she said. “It’s just what I do.”

Hallman said she loves her job because she gets to be around her students and make learning fun.

She has also enjoyed incorporating new technology into her
classroom each year, and noted that when she first started, she was using transparencies on an overhead projector. Now, the students incorporate Chromebooks into the classroom every day, and she uses a smart board.

She said she enjoys learning, particularly about social studies and history.

Alden-Conger Superintendent Brian Shanks described Hallman as “a wonderful teacher who always has her students best interest in mind.”

“She truly cares about her students both inside and outside the classroom,” Shanks said. “If a student is struggling with something, Mrs. Hallman will work to find a solution, regardless of what the problem is.”

He said he is honored to have Hallman as a teacher at the school.

Outside of teaching, Hallman said she and her family are heavily involved in basketball. They love going to games, and in the summer she loves to read books when she has more free time.

Hallman and her husband, Matt, have four children.

Interesting fact: Hallman would be a florist if she weren’t a teacher