LAKE MILLS — A Lake Mills man accused of bilking investors for four years has been arrested.

Randall Finer, 53, was arrested Friday for one count of felony ongoing criminal conduct. He was released later that day after posting a $25,000 cash bond. 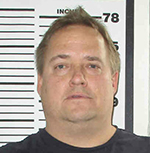 The Winnebago County Attorney’s Office said in a statement that Finer solicited more than $800,000 from community members for investment purposes from 2011 to 2015, and issuing promissory notes equal to the amount of the loan, plus a guaranteed rate of return.

He allegedly made payments to investors and portrayed that money as interest from well-performing stocks when, actually, the investments were losing money.

Finer diverted 52 percent of the money into his own accounts for living expenses, according to the Attorney’s Office.

No one answered a phone number listed for Finer in online records on Friday afternoon.

His arrest Friday was the result of a two-year investigation by the Iowa Division of Criminal Investigation.

Previously, Finer had been ordered to pay civil restitution to some of his investors.

In May 2015, the Iowa Insurance Commission told him to pay $614,272 in restitution plus interest for offering and issuing unregistered securities.

The Iowa Insurance Commission also ordered Finer to stop selling securities and banned him from offering investments in Iowa.

He faced disciplinary action for allegedly not being licensed to sell securities or act as an adviser.

Finer denied the allegations in a 2015 letter to investigators, saying he always made it clear the money was for a personal loan and not an investment.