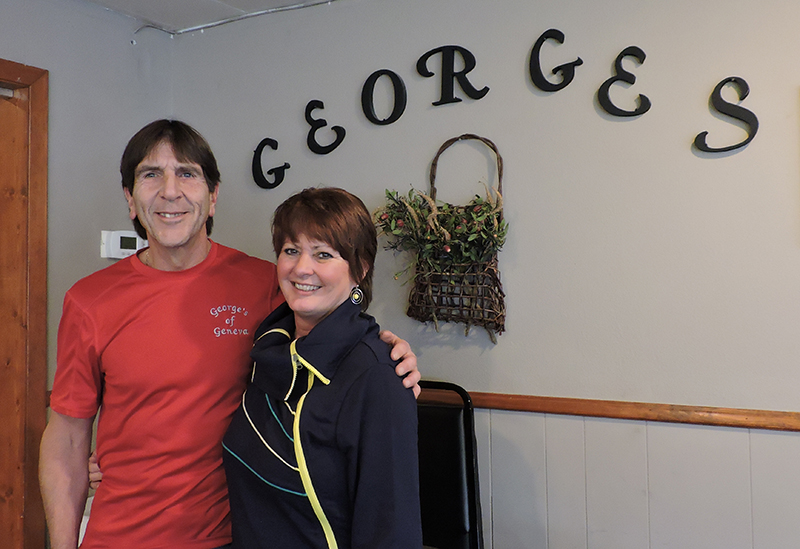 Steve and Jodie Dittrich own George’s of Geneva Supper Club and feel blessed to have a team of 25 staff members that care about the business. – Kelly Wassenberg/Albert Lea Tribune

GENEVA — When someone loves something, they don’t want to let it go. So was the case with a Geneva restaurant.

Almost a decade ago, Jodie Dittrich worked part time as a bartender for George’s Bar and Grill. When the owner at the time decided to sell, she feared that might be the end of the business, so she asked her husband, Steve, to step up to the plate with her and take over.

The couple admits being owners of the establishment has been a learning experience. Despite working at George’s for five years prior to purchasing it, Jodie Dittrich really didn’t know the kitchen side of things until she stepped away from the bar.

Much has changed in the years since. Steve Dittrich, who is a carpenter by trade, has remodeled the kitchen and added a decorative wrapping to the bar, among other upgrades.

The restaurant’s name has also been changed to George’s of Geneva Supper Club. The change reflects the new schedule as the club is typically only open during dinner hours.

The club’s happy hour begins as soon as the club opens at 3:30 p.m. and runs until 5 p.m. The earlier happy hour reflects the business’s desire to encourage a family-friendly atmosphere and focus their attention on the food.

Steve Dittrich said they have a very meat-heavy menu. The meat is bought fresh daily from the meat locker next door and they use the freshest, local ingredients they can find.

The casual dining restaurant features an American menu with items such as hamburgers, wraps, steaks, pork chops and chicken, along with daily specials, such as Thursday’s steak and shrimp or steak and lobster and Saturday’s barbecue ribs.

According to Jodie Dittrich, no one makes ribs like theirs. They take their time making the ribs to ensure they’ll fall off the bone, and the ribs are lathered in their own homemade barbecue sauce.

Steve Dittrich said the business does not serve fast food. Most items are homemade and everything is cooked to order. To him and his wife, the quality of the food is worth the extra time in getting it from the kitchen to their customers.

The club also caters small and large scale events and can provide bar service as well. In addition they host special events at the club. On Feb. 11 and Feb. 14 they will have a soup and salad bar available with menu items, which on Feb. 14 will include prime rib.

George’s of Geneva Supper Club is at 116 Central Ave. N in Geneva. More information about the establishment can be found at www.georgesofgeneva.com or find them on Facebook.