Funeral services for Arnold J. Levisen will be at 11 a.m. Friday at Ascension Lutheran Church in Albert Lea. The Rev. Mark Boorsma will officiate. Visitation will be from 5 to 8 p.m. Thursday at Bonnerup Funeral Service in Albert Lea and again one hour prior to the service at church. Interment will be in Graceland Cemetery. Military honors will be accorded by Albert Lea area veterans organizations. 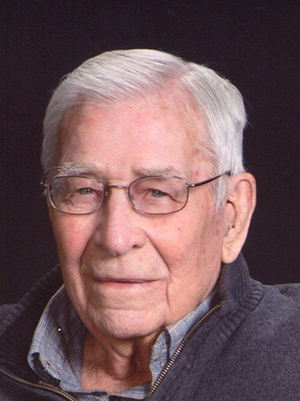 Arnold was born Dec. 19, 1919, to Jens and Marie (Jensen) Levisen in rural Freeborn County. Arnold was baptized and confirmed at Trinity Lutheran in Albert Lea andattended school until eighth grade. He joined the National Guard, and went on to serve his country in the Army during World War II, where he served from 1941 to 1945. He was a member of Company G 135th Regiment of the 34th Red Bull Division. He was very proud of his service.

On June 24, 1948, Arnold married Erma Fogel at Concordia Lutheran Church of Pickerel Lake. Together they made their home near Albert Lea and raised their three daughters. He worked at Universal Milking in Albert Lea, farmed for many years, and worked for Lea College as a custodian. He later retired from Scottsman’s/Queens, where he did quality control. After his retirement, Arnold and Erma did day care in their home. Arnold was a proud member of the Danish Brotherhood, where he and his brothers were instrumental in getting the mermaid and fountain installations in New Denmark Park. He was also a member of the Golden K Kiwanis, American Legion, and Veterans of Foreign Wars. In his free time, Arnold enjoyed gardening and reading to the day care children. He had a love of fishing and caught a 23 1/2 inch walleye on his last fishing trip at age 90. Most importantly, Arnold loved his family and remained very close with his brothers and sisters.