A memorial service for Carol M. Storvick will be held at 1 p.m. Tuesday at Bonnerup Funeral Service in Albert Lea. The Rev. Clayton Balsley will officiate. Visitation will be one hour prior to the service. 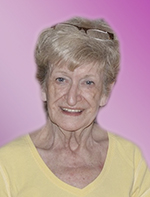 Carol was born Oct. 7, 1938, to Bernice (Olson) and Conrad Berg in Estelline, South Dakota. Carol was raised in South Dakota and graduated from Moose Lake High School in Minnesota.

For 24 years, Carol was a supervisor at the Veterans Administration hospital in Minneapolis. She cared deeply for veterans and was an advocate for veterans rights. Following her hospital career, Carol owned and operated a thrift store called Junk Drawer in St. Paul for four years.

Carol was a self-described “artsy-fartsy” individual. She enjoyed watching politics, listening to music, dancing and caring for her beloved cats over the years. Carol was also actively involved with the ASPCA.

Carol was preceded in death by her parents.