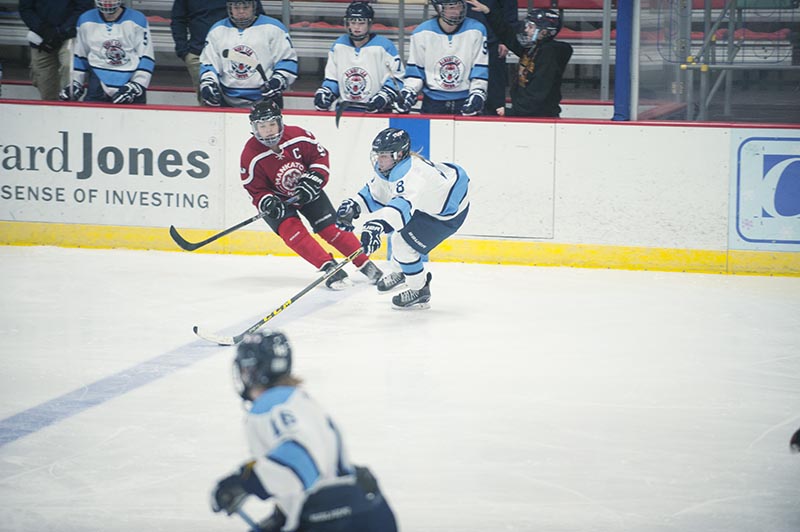 Albert Lea forward Maddy Carstens beats Mankato West defenseman Sydney Morales to the puck in the third period Thursday night. Carstens scored a goal in the period for the Tigers and three goals in the game. Jarrod Peterson/Albert Lea Tribune

In its final game of the season, the Albert Lea girls’ hockey team was looking for something that would give it some momentum,  as the playoffs are just around the corner.

Like the Tigers, the Mankato West Scarlets have also had a tough season, but both teams showed some offensive flashes in their matchup on Thursday night.

In the end, a third period goal by Mankato West’s Lindsey Hays sent Albert Lea to its 20th loss of the season, 4-3.

The Scarlets’ Courtney Blomke notched a hat trick in the second period, as she connected on three goals and Albert Lea’s Maddy Carstens — who also had a hat trick — notched two goals in the period.

The Scarlets headed into the third period with a 3-2 lead, and extended it when Hays beat Albert Lea goalie Maddie Schneider 4:39 into the period.

Moments later, Carstens took the puck and raced down the ice and beat Mankato West goaltender Sarah Olsen to bring her team to within a goal.

Down one with a minute left, Albert Lea was fortunate when Mankato West was called for checking. The Tigers pulled Schneider for an extra attacker and played 6-on-4 hockey for the final minute. Albert Lea had some chances, but couldn’t get a clear shot past Olsen.

Albert Lea ends the regular season with a record of 3-20-1.

Its opponent for sections has not be named.