A memorial service for Charles “Chuck” Green will be at 2 p.m. March 4 at Bonnerup Funeral Service in Albert Lea. The Rev. James Kassera will officiate. Visitation will take place one hour prior to the service. Military honors will be accorded by the Albert Lea area veterans organizations. 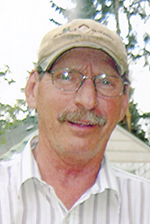 Chuck attended and graduated school from Albert Lea. He went on to join the United States Army, where he served in Colorado Springs, Colorado, then moved to Oregon and California for a time.

He moved back home to Albert Lea, where he worked at Interstate Packaging — where he eventually would retire from.

In his free time, Chuck enjoyed fishing, hunting and had quite the green thumb when it came to gardening.

He was preceded in death by his father, Harry; brothers Steven and Bryce; a niece, Elizabeth “Liz” Zwinger; grandparents Carrie and Charles Green and Madeline and Joseph Flo; as well as his close friend, Kenny Ohnstad.

Chuck will be sadly missed by family and friends.