Funeral services will be at 10:30 a.m. Wednesday at Emmons Lutheran Church, 490 Pearl St. in Emmons. The  Rev. Christopher Martin will officiate. Burial will be in Lime Creek Cemetery, west of Emmons. 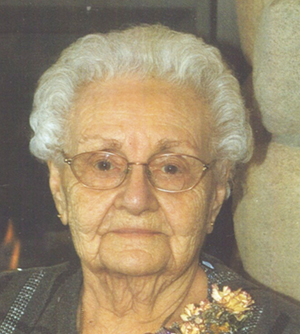 Visitation will be from 4:30 to 7:30 p.m. Tuesday in Fellowship Hall at Emmons Lutheran Church and will continue one hour prior to the service.

Cora Alma (Bidne) Honsey was born on Feb. 20, 1919, in Freeborn County to parents Sever and Guri (Opdahl) Bidne. She was baptized and confirmed at Lime Creek Lutheran Church in rural Emmons. Cora attended and graduated from Alden High School in Alden.

Cora was wed to Clinton Honsey on Oct. 22, 1939, at Lime Creek Church. The couple was blessed with nine — yes nine — children. They made their home west of Emmons in the early years, moved to Silver Lake from 1946 through 1952, and back to the Bidne farm west of Emmons until 1972. The Bidne farm was recognized as a Century Farm in 2015. In 1972 Cora and Clinton moved to Emmons.

Being a homemaker on a farm with many children left Cora to become a very accomplished quilter and baker. Each of her children has something they feel was a specialty — doughnuts, jelly rolls, chocolate cake, 4 o’clock buns, and cookies. And the quilts she made will be cherished for years to come. Cora liked to Polka dance and play card games like canasta and 500 with family and friends. She loved herfamily to the utmost and passed along a strong will, solid faith and sense of humor.