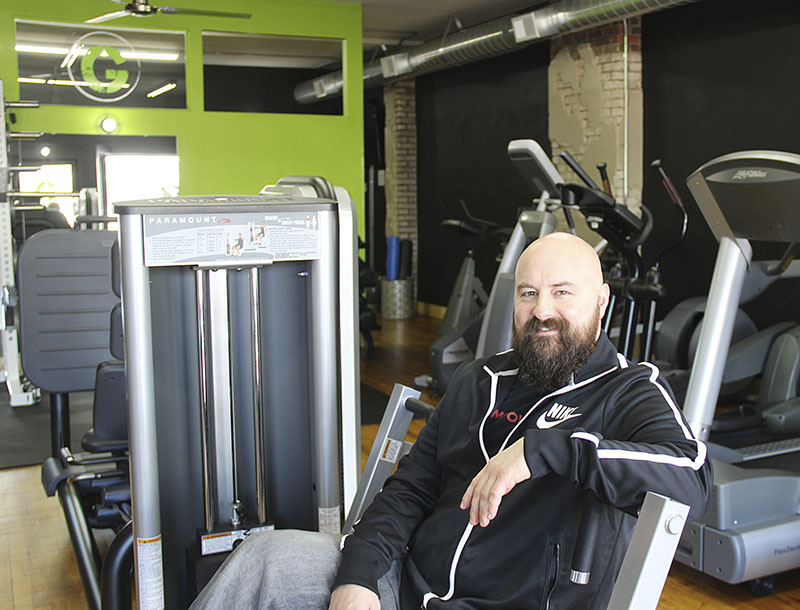 With a background in fitness, Tim Krohn and his wife, Brooke, are co-owners with Dak and Lydia Sorenson of The Gym Geneva. The business opened in May. - Sarah Stultz/Albert Lea Tribune

Facility offers place for rural residents to be active

The Gym Geneva opened in May at 100 N. Central Ave. in the home of the former C&C Liquidators.

Tim Krohn said he was approached by his brother-in-law, Dak Sorenson, about the idea, and with a background in fitness, Krohn said he thought it was something he and his wife, Brooke, could play a part in.

Krohn has worked at fitness centers in the past, as well as District One Hospital in Faribault.

He said the building was in rough shape, and they started out with a lot of demolition.

Sorenson’s wife, Lydia, and her sister, Abby Murray, from The Marketing Plant, helped in the visioning of the color scheme for the building. 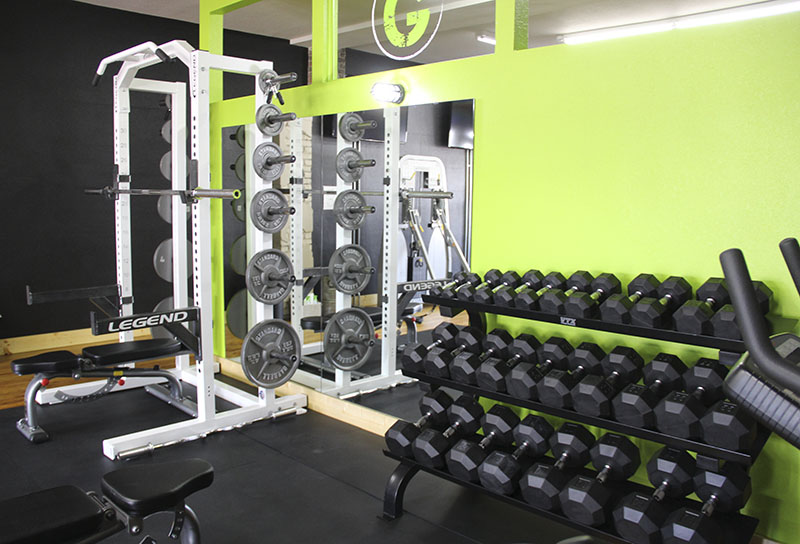 In addition to cardio machines, there are sets of free weights for club members to use. Owners hope to start classes at the gym in the future. – Sarah Stultz/Albert Lea Tribune

The remodeling took most of the winter in 2016, with the help of many local companies for things such as electricity, heating and plumbing, to name a few.

The finished building features mostly black walls with highlights of bright green to match the business’s logo. There is also some exposed brick throughout.

“It has been good,” Krohn said. “(People) were really excited to have something close and to see something in the building.”

There are treadmills, weight machines and free weights, along with other equipment such as jump ropes, battling ropes and tubing. Eventually, Krohn said, he would like to offer classes in the gym.

The gym is open for members 24 hours a day.

He said so far, they are getting people from Geneva and the surrounding rural areas, including Hollandale, Clarks Grove and Blooming Prairie.

Growing up and living in New Richland, Hartland, Ellendale and Geneva throughout the years, he said he would have loved to have a gym like this when he was in school.

“Me growing up, having something like this — it would’ve been unheard of,” he said.

A variety of people use the gym, including some high school students. Kohn said he wants to reach out to more of these students, as well as senior citizens. He said he wants to help seniors realize the benefits of exercise.

Krohn said the business this year is now equipped to handle insurance reimbursements. He also hopes to organize some sessions where people can learn how to use all of the equipment properly.

“It’s cool to see,” said Krohn, who works at Northstar Power Sports during the day. “Back in the day there was nothing.”

He recommended people keep an eye on the company’s Facebook page for updates.

24 – Hours a day The Gym Geneva is open for members. Members use a programmed key pad to enter the building

9 – Months The Gym Geneva has been opened on Central Avenue

2 – Couples who own The Gym Geneva