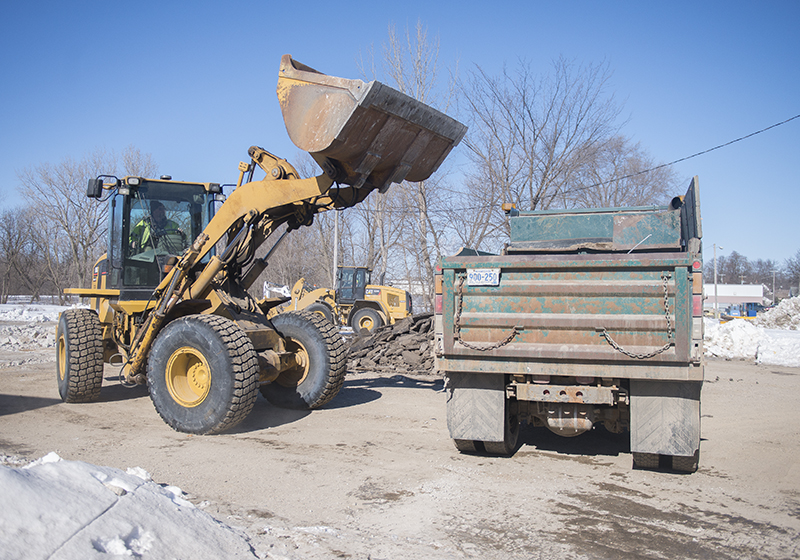 Work is underway at City Garage to prepare for a future addition to the facilities. - Colleen Harrison/Albert Lea Tribune

The Albert Lea Street Department is demolishing a building with the environment and taxpayers in mind.

The department is demolishing the former storage building and apartment at 1016 Madison Ave., adjacent to City Garage, in preparation for an expansion of the garage.

Employees are demolishing the site between periods of snow and ice removal, saving the city direct costs of using an outside contractor to demolish the building, said civil and environmental engineer Phil Wacholz.

“It’s been a good project to fill in their time during this time of year,” he said.

“The Street Department is exhibiting good stewardship and responsible use of resources, all while saving money at the same time.”

“We weren’t able to save it all, but we were able to strip a lot of it so that they could use it for other city projects, like concrete forming or other stuff that they need rough lumber for,” he said.

The city was able to recoup $1,400 from metal recycling, Wacholz said.

Demolition started in mid-January. Employees are jackhammering the floor, and demolition is expected to be finished in about 11 days.

First phase City Garage development includes having one break room and converting the two other break rooms into additional storage and workspace to increase efficiency.

The city purchased the 2.5-acre parcel from Duane Johnson in May 2016.

Phase two of the project would add fleet space for city vehicles. The flow for all of the vehicles is planned to be improved and a salt storage shed would be added.