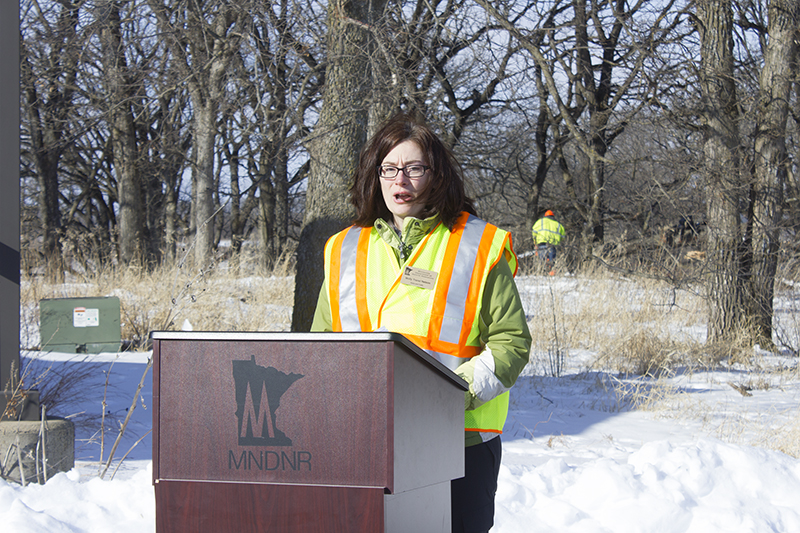 Minnesota Department of Natural Resource officials are overseeing the removal of diseased trees at Myre-Big Island State Park to restore a rare savanna and to prevent further spread of the disease.

The more than 100 diseased oak trees are near the park’s ranger station.

Officials held a news conference at the site Thursday to describe the process and talk about what people can do to prevent the spread disease.

Park Manager Jerry Katzenmeyer said many of the oaks at the park have been impacted by bur oak blight, two-lined chestnut bore or oak wilt.

“While it may be surprising to see large, mature oaks being cut, the reality is that by harvesting the dying oaks, we have a better chance of saving the remaining oaks,” Katzenmeyer said.

Oaks will be harvested through the winter, officials said.

“Restoring oak savanna has long been a goal at the park,” Katzenmeyer said. “Removing the dying trees enables us to restore a landscape that existed when the area was first settled.”

Molly Tranel-Nelson, DNR regional resource management specialist, said oak savanna was once one of the most common vegetation types in the Midwest.

“It was the transitional area between prairies and forests, once covering about 10 percent of the state,” she said. “Savanna was dominated by scattered oak trees, standing in a diverse mix of native grasses and flowering plants.”

She said the trees are older and have since grown too close together.

Since Minnesota became a state, much of the oak savanna once common to south-central Minnesota was cleared for agriculture. The control of fire allowed unmanaged oak savannas to come choked with vegetation, according to the DNR.

“Today, oak savanna is considered one of the rarest plant communities on earth,” Tranel-Nelson said.

DNR forester Brian Schwingle suggested spreading out trees while planting to prevent the spread of oak wilt. He also suggested pruning oaks only in the winter, knowing the symptoms of oak wilt and not moving firewood.

“Oak wilt is a concern for the southern two thirds of the state, but its spread is also easily prevented,” he said.

Harvest is not planned at Big Island because it is dominated by maple and basswood, Katzenmeyer said.

The timber is being sold to Oakland-based Len’s Wood Products.