“The governor should be able to carry on his duties serving the citizens of Minnesota without significant interruption,” Mayo Clinic spokesman Karl Oestreich said. 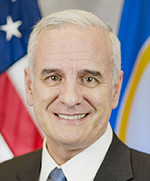 Dayton visited the famed Mayo Clinic in Rochester this week for several rounds of tests. The Democratic governor revealed the diagnosis a day after he collapsed during his State of the State address — an episode doctors said was likely related to dehydration, not the cancer.

Prostate cancer is among the most common forms of cancer in men, especially those over 65. In Pennsylvania, Gov. Tom Wolf recently declared he had a “clean bill of health” less than a year after revealing a prostate cancer diagnosis. Dayton’s own father lived an additional 25 years after undergoing prostate surgery.

Dayton, who turned 70 last week, has had other health issues since taking office in 2011. A series of back and hip surgeries have left him with a limp. He was briefly hospitalized last year after fainting at a campaign event, later blaming the episode on overheating and dehydration.

He was roughly 40 minutes into his State of the State speech Jan. 23 when he paused for a drink of water, appeared to stumble over his words and then collapsed, striking his head on the lectern. He later walked out of the Capitol under his own power and returned home.

Republicans who control the Minnesota Legislature have rallied around Dayton amid the health scares, calling for prayers as he approaches cancer treatment. But the two sides will clash this year as they try to set a new two-year budget.

Dayton has repeatedly said he thinks he’s still up to the job. He has two years left in his second term, after which he’s vowed to leave office.