For the first time in 92 years, Tuesday started without Donald Marcellis Martinson.

Donald was born Nov. 1, 1924, to Jeffery and Theresa Martinson on a small farm in Leland, Iowa. 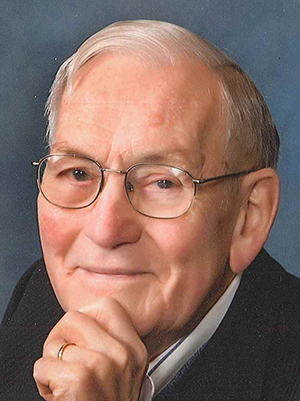 Sad to say, his education got off to a rocky start when after the first day in kindergarten, he refused to go back. He told his parents that he wanted to learn reading, writing and arithmetic, not just nap on a rug. His argument carried the day and he spent the year helping his mother do wallpapering. Working by her side, he learned to trim and paste and how to eliminate bubbles in the wallpaper. These were all skills that he found useful years later when his daughters moved into their own homes. He completed his last wallpapering project at 82.

Iowa law required kindergarten completion before a student could begin first grade, so Don had to go back to make up his lost year in Lake Mills. He then continued through the grade school in Lake Mills and Scarville, Iowa, and graduated from high school in Emmons in 1943. Then Don joined the Navy Seabees from 1943 to 1946, married his sweetheart, Blanche Leonhardi in 1945, saw combat on Okinawa, Japan, and processed out in 1946.

He remembered the words of Abraham Lincoln inscribed over the door at Lake Mills High School, “I will study and prepare myself and some day my chance will come,” so he resumed his education.

Two years at Waldorf College, two more at St. Olaf College, advanced study at the University of Minnesota prepared the kindergarten drop-out for positions as teacher, principal and superintendent in various school district, including Eagle Bend, Renville, Bemidji and Red Wing, where he served as director of business affairs from 1969 to 1985. Red Wing was a place where he had a chance to make a significant difference. He took that chance and succeeded.

His frugal budgetary measures brought financial stability to the Red Wing School District. He did what had to be done even though his budget decisions were often not popular with administration and teaching staff.

“You never need to apologize for doing good,” was what he had heard from his father, and Don took that precept to heart. It wasn’t easy, but Don did a lot of good for students and the taxpayers he served.

He was generous and philanthropic in his support for church and community ventures — though he was known to give short shrift to telephone solicitors. He volunteered with Faith in Action and Men in Mission, and served on the council at United Lutheran Church.

His was a life well-lived. For Don, there is no more fitting accolade than these words from the book of Matthew — “Well done, thou good and faithful servant! Enter thou into the joy of thy Lord.”

A memorial service will be at 11 a.m. Saturday at United Lutheran Church in Red Wing. The Rev. Karl Rydholm will officiate. Burial will be at a later date in Oaklawn Cemetery in Emmons. Visitation will be one hour prior to the service at the church. Memorials are preferred to United Lutheran Church or Red Wing School Foundation. Online condolences may be sent to the family at www.mahnfamilyfuneralhome.com.