Ervin E. Gerber, 74, of Walters died Thursday, Feb. 16, 2017, at his home in Walters. A funeral service will be at 11 a.m. Monday at United Lutheran Church in Walters with the Rev. Donald Rose officiating. Visitation will be from 2 to 5 p.m. today at Bruss-Heitner Funeral Home in Wells and will continue one hour prior to the service at the church on Monday. Military honors will be accorded by the Wells color guard. Interment will be at a later date. Bruss-Heitner Funeral Home in Wells is assisting the family. To leave an online condolence, visit www.brussheitner.com. 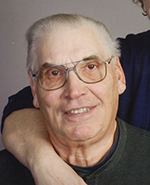 Ervin Eugene Gerber was born April 30, 1942, in Albert Lea, the son of Edward and Martha (Simon) Gerber. Ervin was baptized, confirmed and married at Faith Lutheran Church in Walters (now United Lutheran). He graduated from Kiester High School in 1960 and enlisted in the United States Air Force in 1962 and was stationed at Travis Air Force Base in northern California. He was honorably discharged in February 1966. On Oct. 15, 1966, he was united in marriage to Mary Haukoos. Ervin worked at Speltz Grain and Coal Co. in Walters for two years before moving to Farmers Elevator in Wells for 27 years. He finished his working career at Herman Manufacturing in Wells. Along with occupations, Ervin raised sheep for 40 years, farmed his land and helped other farmers in the area. Ervin served for many years as the Walters Fire Department chief, on the village of the Walters Cemetery board, the United Lutheran Cemetery board and as head usher and church council president. He enjoyed fishing with his grandchildren.

He is preceded in death by his parents Edward Gerber and Martha Peterson; his sister, Helen McNary; two half-brothers, Robert and Merlyn Peterson; and son-in-law, Mark Baca.