Eugene was born on Feb. 4, 1931, to the late Herman and Thelma (Fair) Turner in Albert Lea. He enlisted at 18 and obtained his GED through the service. Eugene served his country for 21 years in the Air Force, serving in Korea, Saudi Arabia, Greenland and Tripoli, Libya. He retired in 1971. He had a love for jets and co-piloting helicopters. After his service he worked as a security guard at Wilson & Co. and as a truck driver for Brit Gravel. 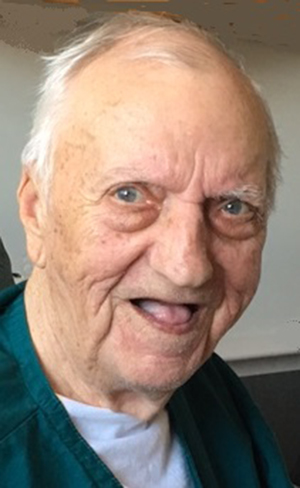 He was a past member of the Veterans of Foreign Wars, Eagles club and the American Legion. He loved to spend time with his family, Sunday dinners and country music — especially “Hello Walls” and “Big Mamou,” which will be forever in his family’s hearts. He enjoyed fishing, camping, woodworking, the outdoors, eagles and time with friends and socializing.

In addition to his parents, he was preceded in death by his stepfather, Roy Lincoln; three sisters, Bernadette, Janice and Joyce; and a grandson, Tyler Turner.

Burial with military honors will be provided by Fort Snelling National Cemetery in Minneapolis, followed by a celebration of life with fishing and Sunday dinner at Edgewarter Park in Albert Lea. The dates will be announced. Thielen Funeral Homein Marinette  is assisting the family.

The family would like to extend a special thank you to Rescare — especially Laurita, Cindy and Kirby; Almost Family — especially Bobbi and Bill; friends from the zoo in Albert Lea — especially Diane and Jill; and all of the certified nursing assistants and caregivers over the past three years who have helped Eugene in some way.