Extension education specialist a mainstay of Worth County 4-H 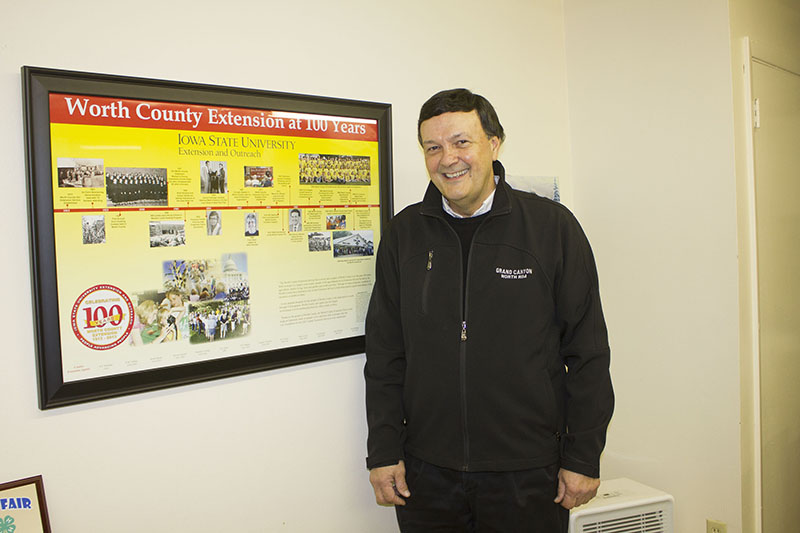 Worth County Extension education specialist Dennis Johnson is overseeing a 4-H program, which has gained elite status in the state of Iowa. — Sam Wilmes/Albert Lea Tribune

NORTHWOOD — Teaching 4-H provides adults the opportunity to teach students lifelong skills, which can translate to success in adulthood.

For one Worth County Extension education specialist, teaching 4-Hers for decades has allowed him to do just that and build an elite program.

Dennis Johnson handles a variety of roles in his position. He works with farmers in crop and livestock production, farm management and family finances, nutrition and parenting, along with 4-H youth and community work.

Johnson was hired in Worth County in 1981 after a six-year stint as a teacher at Glenville-Emmons and Lake Mills.

“I heard there was a little opening,” he said. “I thought, ‘well, that might be worth a try, just to experiment with it,’ and didn’t think I would get the job or anything. All of a sudden, 35 years later, yeah, it happened. It’s been a good run.”

During his tenure, Johnson has made sure 4-H participants have the experience to develop leadership, communication and citizenship.

More than 800 students have attended a biannual Washington, D.C., trip  — coordinated by Johnson — over about 25 years.

“That trip’s been extremely successful, probably the most successful one in Iowa, pretty easily,” Johnson said. “Nobody’s had 800 people go to Washington, D.C., out of the county. That’s pretty much a fact.”

Worth County has sent the most students to the 4-H State Conference in Ames, Iowa, over the last 25 years, Johnson said. The program has been consistently No. 1 in the state of Iowa in sending national and state delegates.

“Kind of a tribute to our county,” he said. “To say that we are not the biggest county in the state of Iowa — we’re about 94th in ranking in population — but we’ve always been first in the number of attendees at that conference for about the last 25 years.”

He credits a strong Worth County Fair and thanks local leaders for playing a role in shaping a successful program.

“We’ve been pretty proud of the fact we can reach large masses of numbers of youth,” Johnson said.

Johnson and his wife, Janelle, have four sons, Jay, Jack, Ben and Brock.

800 – Students who have attended the Washington, D.C., trip over about 25 years.

4 – Children Johnson and his wife, Janelle, have: Jay, Jack, Ben and Brock

35 – Years Johnson has worked for Worth County Extension.