Gertrude (Gertie) Martha Nielsen, 87, lost her battle with asthma on Sunday, Feb. 5, 2017. She died at home surrounded by family. 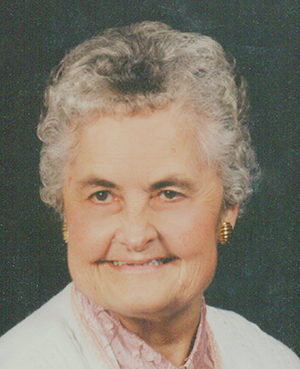 As a teenager, she went to Medicine Lake Camp in Minneapolis, where Billy Graham was speaking. It was there that Gertie accepted Christ as her Lord and savior.

Gertie graduated from South St. Paul High School in 1947. She then went to work at Stockyards National Bank as a bookkeeper and teller. Gertie and Earl Nielsen were married by her uncle, the Rev. Paul Lemke, on June 10, 1952. They lived in Virginia while Earl finished out his active duty in the United States Army. After Earl was discharged, Stockyards National Bank was excited to have Gertie work for them again.

In 1954, Earl and Gertie started farming. Gertie was a city girl, but quickly transitioned into a very diligent farm wife. She worked alongside Earl in the barn, ran for parts and assisted Earl in any way she could all while raising their four children, Karen, Jim, Wayne and Dan.

She taught Bible school, Sunday school and was involved in ladies aid at First Baptist Church in Oakland for several years. Earl and Gertie served in the Gideon ministry for over 25 years.

Gertie enjoyed finding good deals at garage sales, especially when she could find button up shirts with a pocket for Earl and Jim. She also loved to bake large meals for family, friends and anyone working on the farm. Her love of baking led to a 35-year career decorating cakes with her friends LaVonne Froiland and Sigfried Nelson. They specialized in wedding cakes. Gertie always made sure the bride and groom ordered enough cake so everyone could “get a good sized piece.”

Gertie was a prayer warrior. Her love for Christ shined through in her kindness, love and caring for others. Earl and Gertie had a close group of friends for over 50 years affectionately referred to by her family as the gang. They celebrated life’s joys and disappointments together and supported one another along the way.

She was a loving wife for over 64 years. In her mother’s later years, Gertie cared for her so she wouldn’t have to go to a nursing home.

She was preceded in death by her parents and her sister, Dorothy Lysdale.