A Glenville man who allegedly strangled a woman in January is facing two felony charges in Freeborn County District Court. 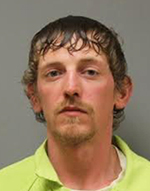 Court documents state Christensen was charged after Freeborn County Sheriff’s Office deputies responded to a 911 hang-up call Jan. 8. Upon arriving, a witness reportedly told deputies Christensen assaulted the alleged victim by pushing her to the floor and choking her.

Court documents state the alleged victim said she fell in the kitchen and he got on top of her and choked her. She said they had been arguing about her dogs.

Red marks on the alleged victim’s neck were reportedly consistent with choking.

Court documents state Christensen has been convicted four times of violating an order for protection and once for felony terroristic threats.

Christensen’s next court appearance is scheduled for Feb. 23. Felony domestic assault carries a maximum sentence of five years in prison and a $10,000 fine.