Born in 1928 in Bernadette Township, Grace was the fifth of 12 children by Albert and Helmine (Redning) Lindquist. Her strength and character were  shaped early in life when, at the age of 4, Grace contracted polio, requiring a four-month quarantine from her siblings. With the care and dedication of her parents, who exercised her legs daily to prevent paralysis, Grace healed and went on to lead a normal life.

A 1946 graduate of St. Peter High School who also attended Mankato Commercial College, Grace took the hard-earned wisdom of challenges overcome into the working world, where her jobs — ranging from a telephone operator at Northwestern Bell Co. in St. Peter to the department head of the candy and school aisle at Gibson’s Discount Center/Pamida — were marked by diligence, dedication and lifelong friendships. After her retirement from Gibson’s/Pamida, “Gracie” — as she was known by family and friends alike — continued to meet for coffee with the “Pamida Girls.” 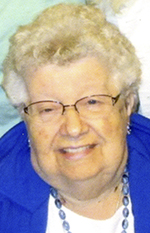 Perseverance and strong bonds also marked the story of Grace’s family life. On Sept. 14, 1949, Grace married Charles Flowers Jr., with whom she had five children during their 12 years of marriage (they later divorced): Debbie, Michelle, Wendy, Sheryl and Terry. Her children were her life, and — as a single mother — she devoted her life to raising them on her own, all without the help of social services. Even after her children had grown, Grace made time to be there for her children when they needed a helping hand with babies, making dinners, and washing and folding clothes.

Ever the proud grandmother of 19 grandchildren, “Grandma Grace,” “Gram” or “Grandma Pooh” — as they affectionately called her — relished attending their many school sports, high school musicals, plays, confirmations, graduations and weddings. They will all miss her affection and devotion to them — a love epitomized by the yearly birthday cards she sent, their colored envelopes seemingly timed to appear before any other birthday cards.

Grace loved baking — her specialties were snicker-doodle cookies, sweet breads and peanut butter bars, which she would have ready for visitors or for special care-packages sent to her grandchildren in college. She also enjoyed reading cookbooks for recipe ideas. Grace was also an expert on the weather, a topic that would begin every conversation, email or card.

She made her final years at Senior Court and Oak Park Assisted Living, where she kept the staff busy with her humor, her opinions and stories about her family.

While Grace considered herself simple and humble, her impact on family and friends was anything but. She will be remembered for her gentleness, thoughtfulness, caring personality and — most importantly — her love for all of them.

Grace is survived by her five children, Deborah (Michael) Sturm of Farmington, Michelle (David) Dudley of Lakeville, Wendy (Craig) Sigurdson of Neillsville, Wisconsin, Sheryl Olson of Albert Lea and Terry (Joyce) Flowers, of Rochester; her 19 grandchildren; and 23 great-grandchildren. And though they lived far apart, Grace was surrounded by the love of her siblings up to her death: Arlene Lindquist of St. Peter, Clarice Ziebarth of Le Sueuer, Willis Lindquist of St. Peter, Donna Chommie of Bismark, North Dakota, Dennis (Carol) Lindquist of Apple Valley, California, and Ann Marie (James) Samson of Riverside California; and many nieces and nephews, all of whom were very important to her.

Grace is preceded in death by her parents and ex-husband; as well as her siblings Maurine Lindquist, Doris Larson, Kenneth Lindquist, Millie Rommel and Stanley Lindquist.

Family and friends will gather to celebrate Grace’s life and the impact she had on them at a visitation from 3 to 6 p.m. today at Bonnerup Funeral Home in Albert Lea. Her funeral will be at 10:30 a.m. Monday at Trinity Lutheran Church in Albert Lea with visitation one hour prior. A luncheon will follow. She will be buried alongside her mother and father at Swan Lake Cemetery in rural St. Peter. Burial will be at 3 p.m. To leave an online condolence for the family, visit www.bonnerupfuneralservice.com.

Her family extends special thanks to all individuals at Oak Park Place and Hospice who cared for Grace in her final days.