Funeral services for Helen B. Allen of Albert Lea will be at 10:30 a.m. Thursday at  First Lutheran Church of Albert Lea. The Rev. John Holt will officiate. Visitation will be from 5 to 7 p.m. Wednesday at Bonnerup Funeral Service and one hour prior to the service at the church. Interment will be in Graceland Cemetery. 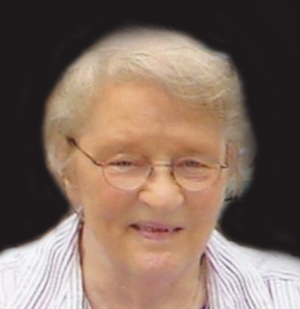 Helen B. Allen was born Nov. 1, 1923, to Rena (Rasmussen) and Chester Jorgenson in Bath Township in Freeborn County. She attended schools in Albert Lea. She was united in marriage to Dean Arthur Allen on March 27, 1943, at First Lutheran parsonage in Albert Lea. She was a wife and homemaker. Not until her children graduated high school did Helen go to work. She helped set up the original Gibson/Pamida store, worked there 20 years and helped lock the doors when the south store closed. She made lifelong friends working there and after retirement the Gibson girls still got together.

She loved to sing and as a teenager she was heard on the KATE radio Studio Talent Show and at other venues. She was an active member of First Lutheran Church, Veterans of Foreign Wars Auxiliary, Naeve Hospital Auxiliary, the US Bowling Congress, American Red Cross bloodmobile, Albert Lea Art Center, Freeborn County Historical Museum and a 20-year member of the YMCA. Helen bowled on three different leagues during here lifetime and enjoyed the comradery it provided. She was an avid Albert Lea High School wrestling fan, attending matches home and away. She also enjoyed watching the Minnesota Twins and Vikings. For many years she took family fishing trips up north to Ole’s Resort in McGregor. Her children lived throughout the US and she loved visiting them in Nevada, Arizona, California, Florida, Indiana, Oregon and Texas. In her later years Delilah, her cat, put a smile on her face and laughter in her heart. Her hobby was sending greeting cards to family and friends for every occasion.

She was preceded in death by her parents; her husband, Dean; and brothers and sisters-in-law Bernard Jorgenson, Howard and Irene Jorgenson, Gene and Helen Jorgenson, Lloyd and Margie Jorgenson; and brother-in-law, George Boettcher.

Helen was extremely proud of her children and family and loved spending time with them above all else.

She treasured her many friendships and was very generous with her time and resources. She will be missed by many and her family loves her a bushel and a peck.