Jane Franklin was born Oct. 14, 1937, in Woden, Iowa, to Geerd and Evelyn (Johnson) Eden.  At the age of 5 she was adopted by Irving and Martha (Jensen) Ambroson and raised in Albert Lea. 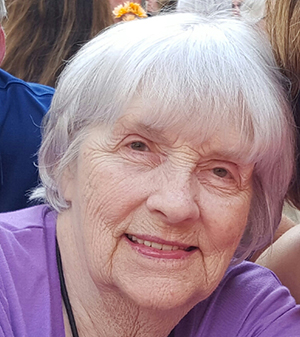 In 1957 she married William Bridley. Together they had four children, Jay, Jody, Jed and Jan.  They lived in Albert Lea and surrounding communities in southern Minnesota before divorcing in 1977. Jane later moved to Idaho where she met and married Carl Franklin. They moved to Easton, Pennsylvania, and divorced in 1996. Following the divorce Jane returned to Minnesota to be near family and lived in Pine City and McGregor before moving to Northfield in 2005.

Jane enjoyed craft work, could described as an eclectic collector and was a former member of St. John’s Lutheran Church. She was happy, positive, giving, caring and chatty. She also had a fondness for Tootsie Rolls and coffee. Jane was also an avid genealogist; spending many years tracking down her birth parents and siblings. She loved her family dearly and she will be missed.