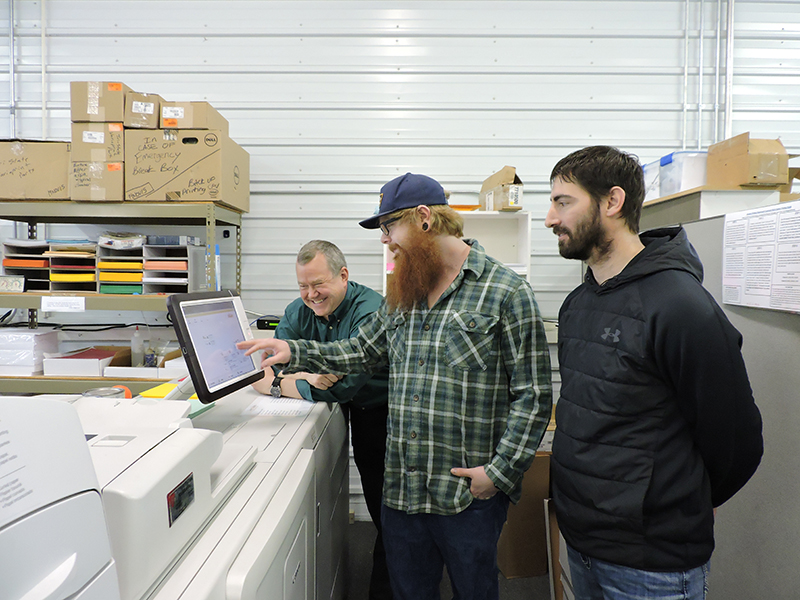 MANCHESTER — Sometimes businesses are forced to reinvent the wheel, and Jensales in Manchester is doing just that.

After delving into the ecommerce world in 2012, Paul Jensen said his company hit a few hurdles the business plans to catapult over in a couple of months as it relaunches its website. According to Jensen and his director of sales and marketing, Tim Shaw, the website’s offerings will increase 10 fold — from 50,000 items to 500,000.

The journey to make the bigger website a reality has not been easy — mostly because the company’s needs far exceed those of other businesses that offer products online.

Many business may offer a couple hundred products with varying options, such as a specific shirt online that can be ordered in a variety of colors and sizes. The wealth of data they needed to be able to put on a website was much higher.

Jensen said most companies with the catalog of products they do would have their own website-developing department with several employees dedicated to make sure everything runs smoothly. Smaller businesses like Jensales rely more on templated programs in which someone can input data into a program that formats it onto the website for them.

“It broke them all,” Shaw said of the company’s product line. “The servers couldn’t handle it. The limitations of sorting categories they were just incapable of handling this sort of product line.”

Jensen said their range of parts also created its own set of problems. Most template-type programs that a typical part store might have would use make and model type information. Due to their expansive aftermarket parts line, the company carries several different parts that were used universally, on a wide variety of makes and models. Pre-built website programs were just not built to handle what Jensales needed them to.

As a result, Shaw has had to take the framework of a template program and use it as a foundation to be added upon.

“We’re putting a broad spectrum of parts together in one place from sources that use their data differently,” Jensen said.

That meant that Shaw had to collect a large amount of data from several sources in order to compile it on to Jensales new website.

The data collection process took a good amount of coaxing.

“It’s like pulling teeth in the ag world,” Shaw said. “It’s unbelievable how people protect their data when it doesn’t serve them any purpose to do so.”

Jensales will also offer a new lawn and garden line and aftermarket parts for new equipment.

“The Jensales brand became known for the classic and restoration tractor, but we’ve grown way beyond that,” Shaw said. “The new equipment in the fields today — planting and harvesting — we’ve got new aftermarket parts for that as well.”

The company’s online presence has branched into social media as well. Jensales customers rarely walk through the front door, so they’ve had employee Brandon Irwin manage that area.

According to Irwin, he sees the good and bad in being a color blind business. Since Jensales covers all makes and models — not just a certain line — he has to decide what keywords to boost that may get the most hits.

He said if they just targeted on brand, they could probably dominate in that area, but the company covers 250 brands with 25,000 combinations of models.

The success the business has seen with online marketing has Jensen thinking he might have to add new staff.

While Shaw and Jensen both emphasized that having a user-friendly website is of the utmost importance, they still plan on having live chat available for customers, and those calls will not be outsourced. It’s all part of the service that Jensales provides.

It all goes back to a question Jensen asked himself when he began. Why would people buy parts from them?

The answer, according to Jensen, is that his company provides a service. It has access to all the necessary factory information, including the legacy parts numbers, so if someone comes in needing a specific part, such as a clutch assembly, no one has to guess which one of four potential options the customer needs. Since Jensales has the original parts catalogs from the company, staff can verify which one of the four parts the customer needs based on the equipment’s serial number to ensure the customer gets the the right part, the first time.