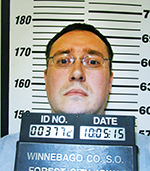 He was accused of committing sex acts on a girl younger than 12 multiple times in a 12-month period ending in August, according to court documents.

Myers will be sentenced on March 7 in District Court in Forest City.

Prosecutors have agreed to dismiss five additional sex abuse charges in exchange for the guilty plea.

They will recommend to Myers’ sentencing judge that he be ordered to serve up to 25 years in prison, be subject to a no-contact order with the victim and be supervised by the Iowa Department of Corrections for the rest of his life, according to court documents. He would be required to serve 70 percent of the term, or 17.5 years, before being eligible for parole.

Myers is already on the Iowa Sex Offender Registry.

He was convicted in June of possession of electronic media depicting a teen girl involved in a sex act.

Myers received deferred judgment and probation in the exploitation case.