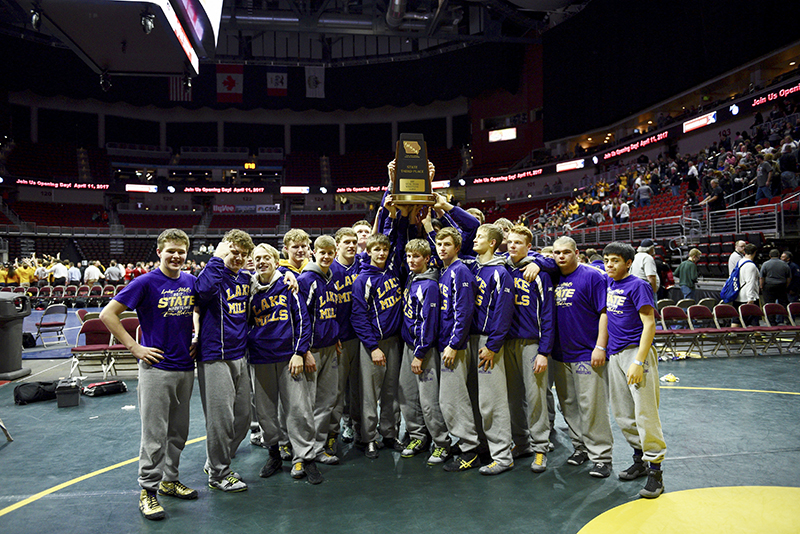 Lake Mills won its first match of the day when it beat Logan-Magnolia.

In their second match, to go to the championship, the Bulldogs fell to No. 1 seed Don Bosco, 36-28.

The loss sent Lake Mills to the third-place match, where it faced Missouri Valley.

The Bulldogs took down Missouri Valley, winning by two points, 39-37.

But Lake Mills would come charging back, winning the next seven matches with five coming via pinfall to win the match.

Don Bosco took the first five matches against Lake Mills. Michael Olsen got the Bulldogs on the board with a forfeit win, but Don Bosco would take the next two matches to go up 27-6.

Lake Mills would battle back, though. Drake Harnish got it started when he pinned Alec Carpenter. Then, Gabe Irons pinned Wyatt Sawvel 5:08 into their matchup. Slade Sifuentes won by forfeit, and Lake Mills trailed 27-24.

But Don Bosco would come back to take the next two matches to put the match out of reach the of Lake Mills.

The loss set up a meeting with Missouri Valley to figure out what school would take home third place.

Missouri Valley took the first two matches to hold an early 7-0 lead. Cael Boehmer got Lake Mills on the board when he pinned Jacobb Bowman to make it 7-6.

The teams would trade the next two matches, with Skeeter Bostwick beating Maverick Schmitt and Olsen took down Joe Johnston. Missouri Valley would then pick up wins over Alex Albert and Cole Bergo to take a 25-12 lead.

The Bulldogs would roar back, though. Irons and Sifuentes both won with pinfalls. Irons won at the 2:59 mark while Sifuentes barely broke a sweat, winning in 23 seconds.

Lake Mills would counter by winning the next three matches and making up the seven-point deficit.

It started when Cory Mathahs won an 11-6 decision over Arron Olson. That made it 31-27. Caiden Jones and Helgeson both earned pins, with Helgeson’s coming with 14 seconds left in his match with Zayne Carrier. That made it 39-31, and an insurmountable deficit for Missouri Valley to overcome.

This post will be updated as information is released.