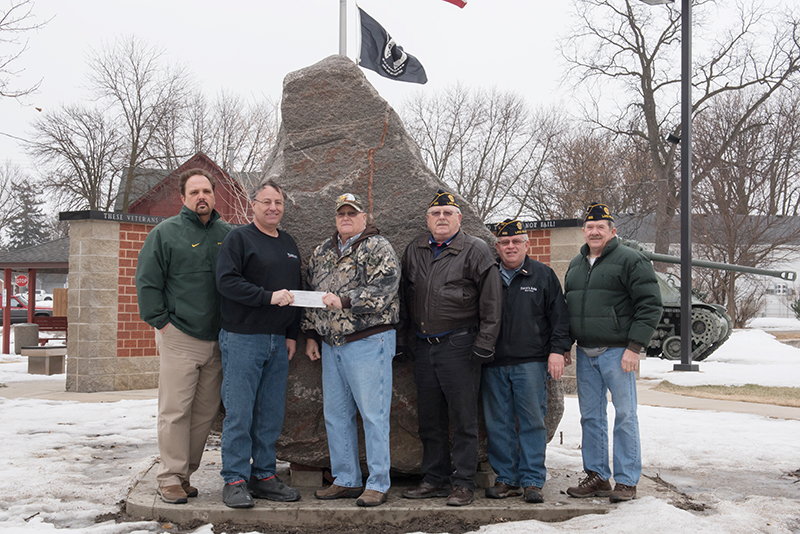 Leon Christianson, second from the left, accepts a donation to the Lake Mills’ Freedom Rock project. Al Hagen, far left, and Don Wheatley, third from the left, presented the check on the behalf of the Ley Foundation, which is associated with Farmers Trust and Savings Bank in Lake Mills. Duane Gudmonson, David Anderson and Richard Bowman of American Legion Otto Chose Post were present during the presentation as well. - Lory Groe/For the Albert Lea Tribune

LAKE MILLS — Arlington Park in Lake Mills will soon boast a Freedom Rock thanks to one persistent resident, who managed to get the project done one year ahead of schedule.

Bill Clark was with his wife, Diane, at an art gallery in Clear Lake listening to Ray “Bubba” Sorensen speak of how he was inspired to create the very first Freedom Rock in honor of his relatives who served in the military. After completing this rock, Sorensen felt compelled to do more and had set out in hopes of every county in Iowa having their own.

While most of these rocks are located in the county seat, Clark felt that Lake Mills’ Arlington Park would be a wonderful spot to host one of the rocks. Following the weekend lecture, he spoke to people in the business community, friends, family and fellow veterans.

“Everyone was all over it,” Clark said. “No one said no.”

By that Monday the funds were raised, and on Tuesday morning he mailed off a check for the $1,000 deposit so that Lake Mills could be placed on the waiting list. Clark was originally told in 2014 that they would have to wait until 2018. With some persist phone calls, he was able to have the date moved up to this April.

Together, with the help of a committee that now works on the project, Clark was able to find a rock they felt would be suitable for artwork. The 7-foot by 7-foot by 5-foot rock was found in Emmons and hauled to the park by Holland Moving Company.

Additional funds are still being accepted for the project, which will include the painting of the rock, additional landscaping and installations

“We, as the committee, have made suggestions to Bubba on what we would like to see on the rock,” Clark said. “However he will decide what will work best for the size and shape of the rock.”

In addition to honoring veterans who have served their country, the committee wanted to recognize first responders, police officers and firefighters.

“This is not just Lake Mills’ rock,” Clark said. “It belongs to all the veterans in the county. We want to extend this feeling of patriotism to all of those veterans and also our close neighbors in Emmons and Joice, Iowa. Those people are part of our community, and we want them to feel included in this as well.”

The park is also set to receive another addition to its grounds. At three corners of the park stand statues of veterans, which Clark said represents protection at the park. Clark said a fourth statue will soon be added and this statue will represent an often overlooked population in the military — the female soldier.

“I feel strongly about it because I personally know a lot females who have served in the past and ones that serve now,” Clark said. “And I feel it is owed to them to have representation.”

For more information about the Lake Mills Freedom Rock, call Bill Clark at 641-590-2229. To make a donation in support of the landmark, send a check to City of Lake Mills/Freedom Rock and mail it to Lake Mills City Hall, 105 W. Main St., Lake Mills, IA 50450.