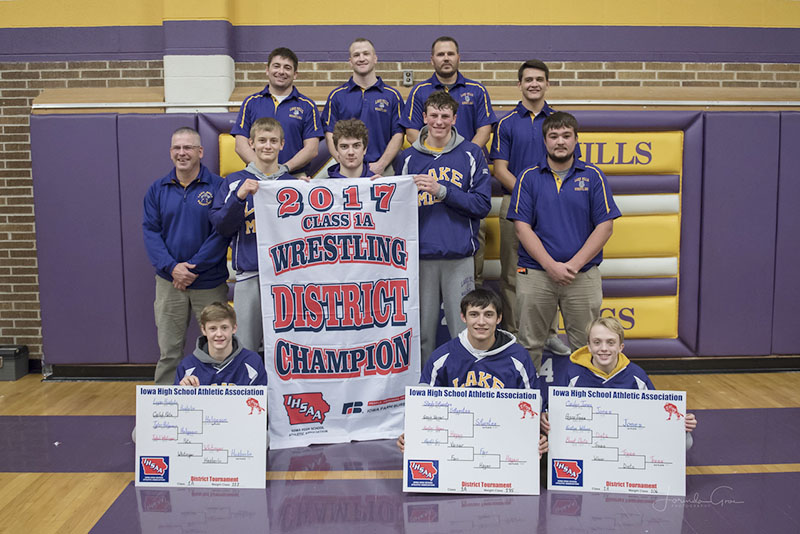 The Lake Mills wrestling team has had a fantastic season, and that will continue.

On Saturday afternoon and for the first time in 17 years, the Bulldogs won the district title and sent six individual wrestlers to state the tournament.

The six wrestlers Lake Mills will send to state is the most qualifiers it has had since 2000, when it also sent six.

“Our kids wrestled great today,” Lake Mills coach Alex Brandenburg said. “For us to go from only one qualifier last year to six this year is huge for our program because more kids in our program believe they can get there.”

Sifuentes has had two dominant years and he won his 106th straight match Saturday afternoon when he pinned West Hancock’s Hunter Hagen.

“(Slade) has been more dominant than I have seen him this year,” Brandenburg said. “He is peaking at the right time, and I am excited to watch him at state.”

Jones had a thrilling win over North Butler’s Bryce Tree in the semifinal and then pinned Nashua-Plainfield’s Brock Dietz in the finals.

Helgeson won his semifinal match 9-2, then came from behind to beat Belmond-Klemme’s Logan Heaberlin in overtime, 6-4.

“(Caiden) had a great day and beat two tremendous wrestlers,” Brandenburg said. “(Tyler) showed a lot of grit coming back and beating a kid he hadn’t even scored on the first two meetings.” 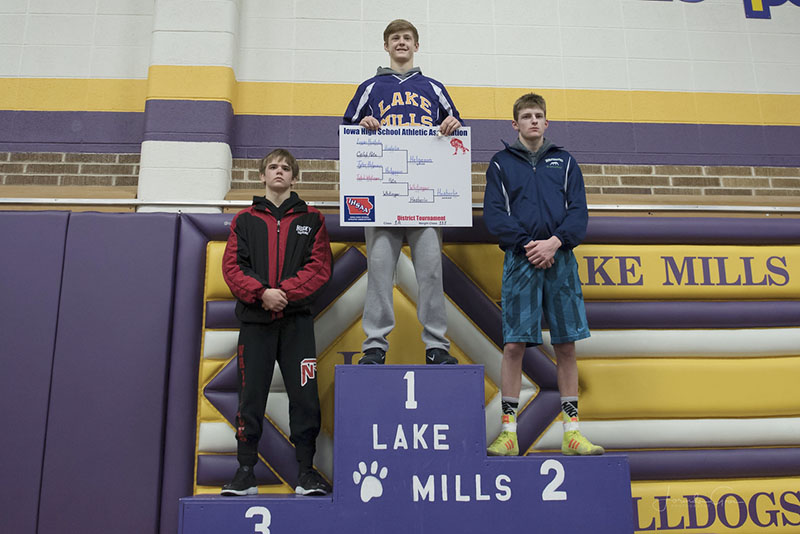 Irons, Olsen and Boehmer each placed second in their respective weight classes.

Boehmer started his day with a pin, but then fell to three-time state place-winner Jacob Hansen of West Fork in the finals. Boehmer would win in a wrestleback against Riceville’s Andrew Morsiche by pinning him in the second period.

Irons had a similar road. He won in the first round, but fell to Zach Ryg of Central Springs. In the wrestleback, Irons dominated Belmond-Klemme’s Tucker Kroeze by a score of 7-0.

“(Cael) and (Gabe) bounced back well after their losses,” Brandenburg said. “They will both remember today for the rest of their lives, as there is no greater feeling for a high school wrestler than qualifying for state the first time.” 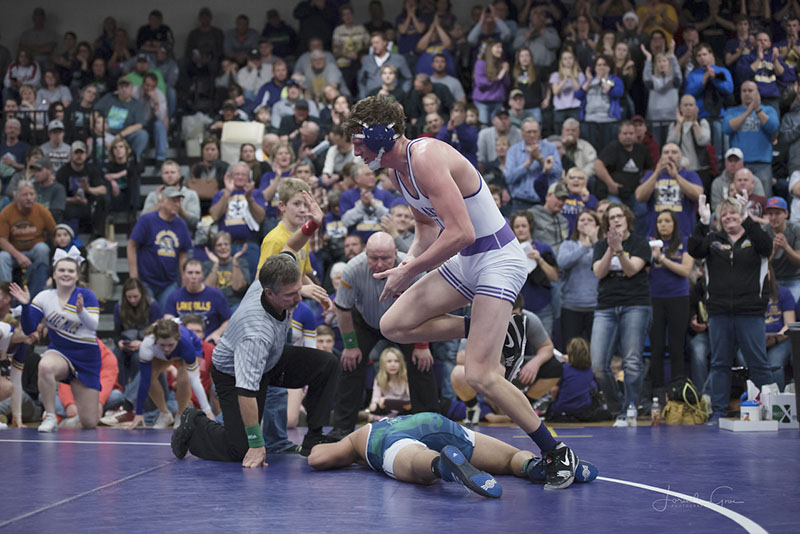 Lake Mills’ Gabe Irons gets up after defeating Belmond-Klemme’s Tucker Kroeze. This is his first trip to the state tournament.

Olsen will return to the state tournament for the second time. He won his opening match 13-6, then fell to North Butler’s Brandon Trees, who is the No. 10 ranked wrestler in the 152-pound weight class. Olsen beat West Hancock’s Bennett Bruns via pin.

“(Michael) wrestled really well today, and I am really excited for him to get to wrestle at state again,” Brandenburg said.

Irons and Boehmer will be making their first appearances at the state tournament.

“(Kyle) has nothing to hang his head about as he closed the gap by a ton on two kids who had dominated him earlier in the season,” Brandenburg said.

Lake Mills will wrestle in the State Dual tournament on Wednesday, and the six individual wrestlers will wrestle on Thursday afternoon. Both events will take place at the Wells Fargo Arena in Des Moines.