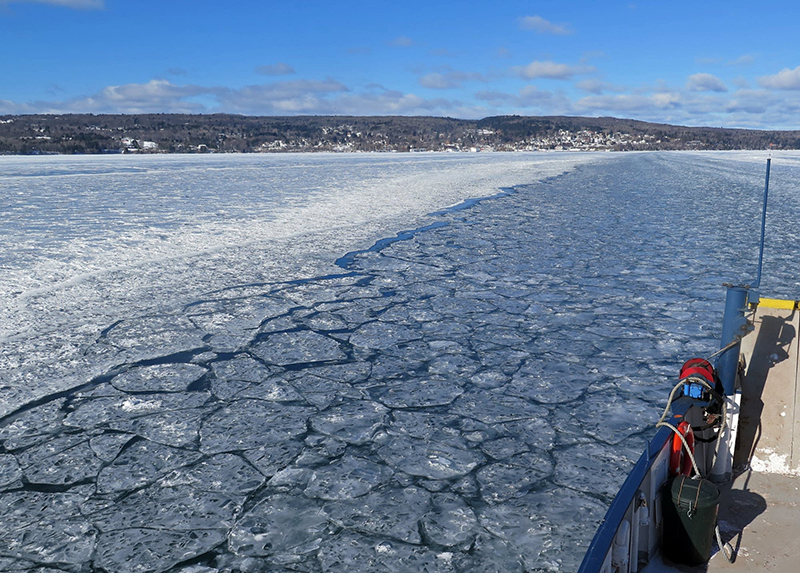 Typically, by this time in the winter, the ice is thick enough to support an "ice road" from Bayfield to Madeline Island. This year, though, the ferry will run all winter long, for the second year in a row, and third year in the past six. Dan Kraker/MPR News

There ought to be a road here, made of ice. Lake Superior should be frozen solid, and the Island Queen should be snug in dry dock for the winter.

But there’s no road this winter, nothing’s solid and though it’s February, the Island Queen is still working in open water, making the 25-minute trip between Bayfield and the town of La Pointe on Madeline Island eight times a day.

“This ice we’re going through right now is just turned up over and over and over again, so it’s probably only 2 inches thick, originally,” captain Shannon Mager said as she steered the ferry through broken plates of ice.

In most years, the ice is too thick by now for the ferries to plow through. But that’s not the norm anymore. This year’s mild winter has meant another record low year for ice cover on Lake Superior. For the second year in a row, the Madeline Island ferries plan to run all winter long — the first time that’s ever happened.

The sight of the ferries in February offers clear-eyed evidence of climate change in the Upper Midwest. Island residents say they can’t rely anymore on the winter ice pack. And that’s having a big impact on everyday life.

The story of Madeline Island Island’s climate shift can be found off the ferry’s bow, and in 150 years of data dug up by an ambitious local high school student.

First the ferry. Prior to 1999, the region’s four ferries never ran all the way through the winter. But in four out of the last 18 winters, the ice hasn’t thickened enough to support an ice road. In two other years the road was only open about a week.

Radtke pointed to a line of discarded Christmas trees that have been propped in the snow, stretching across the thin layer of lake ice, marking where an “ice road” is typically built connecting the mainland with Madeline Island.

“People used to be able to almost mark their calendars and say the ferries will stop sometime around the first or second week of January,” Radtke said, “then the ice road will come in maybe a week to ten days after that.”

The ferry is a lifeline for residents. It transports school kids, commuters who work on the mainland, vehicles and supplies. But it operates on a strict schedule. The last ferry to the island leaves every night at 5:30 p.m.

And that’s why the ice road is such a welcome change, said Michael Childers, a resident who came out to meet the Island Queen as it pulled in to Madeline Island, because it offers a freedom to travel much more convenient than the ferry.

Childers and his husband own a small business called Madeline Island Candles, the first house off the ferry in La Pointe.

They’re among the 250 or so people who live year round on the island.

The 65-year-old has lived on the island virtually his entire life. He and his brother own a construction company. They also operate what are known as wind sleds, big aluminum boats with two huge fans on the back that propel people across the ice when it’s too thick for the ferry, but not yet strong enough to support the ice road.

He checks the ice every day, and plows the road when it’s open. When it’s in place, he said, “it’s like an extension of Highway 13. It’s busy.”

Nelson, though, acknowledged it’s been a couple lean years for his company, with no wind sleds to operate, and no ice road to maintain.

“What’s kind of concerning is that they’re happening now two years in a row. Those are concerns, of course, if you rely on ice, it’s concerns for us.”

What Nelson is experiencing first hand has been documented by scientists. Ice cover on Lake Superior has declined by nearly 80 percent since 1973, when federal researchers began keeping ice records.

In 2007, Bayfield High School student Forrest Howk scanned through microfilm copies of newspapers dating back to the 1850s, looking for ice-in and ice-out dates for a science project. The work was eventually peer reviewed and published.

Howk is in Seattle now, working on climate change issues for The Nature Conservancy. His father Neal Howk, though, recalled how what his son found was startling.

And that trend has continued in the past decade.

Nearly 140,000 visited the park that February and March, a time of year typically the park has vrtually no visitors.

“Suddenly we were seeing more people than we see in the middle of the summer,” said Howk.

The Bayfield Chamber of Commerce estimated the caves had a $10 million to $12 million impact on the regional economy.

The caves used to be accessible virtually every winter, Howk said. Now, it’s hit or miss.

Prior to 2014, it had been five years since the ice was thick enough to walk to the caves. It’s virtually certain this year will now be the second consecutive winter without access to the spectacular caves.

There will, of course, continue to be cold winters with lots of ice on Lake Superior. Just think back to the polar vortex of 2014.

“We’re still going to have high ice years, and low ice years, we’re just going to see more and more of those low ice years,” said Jay Austin, a physicist at the Large Lakes Observatory at the University of Minnesota Duluth.

He’s found that even small changes in air temperature can lead to significant changes in ice cover.

“The difference between a year when there’s basically no open lake ice, and a year when you have significant ice, might be due to a difference in air temperature as little as 2 to 3 degrees Fahrenheit,” he added.

Average winter temperatures in northern Minnesota have risen by about one degree per decade since the 1970s.

Austin sometimes fields the “why should I care” question, as in why should the public care that it might be a couple of degrees warmer by mid-century.

He often answers in terms of ice and water. Natural systems, like ice on Lake Superior, are really sensitive to those relatively small changes.

“Small changes can have big impacts, and that’s one of the points we can do a better job of getting across sometimes,” he said. “It doesn’t take much before we’re going to be in a largely ice free environment.”

That change would mean a drastically different life on Madeline Island.

“If we move as it appears we are in a direction where we lose our ice road and our wind sled, a part of what has made life interesting and special here will go away,” Childers said. “And that will be a sadness for most of the island residents.”