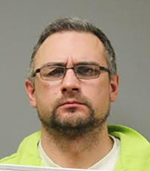 Court documents state Buchli was charged after Albert Lea police officers responded to a hangup 911 call at a house Saturday.

Buchli allegedly grabbed a roll of duct tape and threatened to kill the victim, who was known to Buchli. He reportedly grabbed her by the throat to push her against the wall, causing her to hit her head on the wall and making it difficult for her to breathe.

Buchli was convicted of fifth-degree assault in April 2011 and domestic assault in August 2007.

Buchli was released on his own recognizance on Monday, contingent on following court recommendations. His next court appearance is scheduled for Feb. 16.

Felony domestic assault carries a maximum sentence of five years in prison and a $10,000 fine.